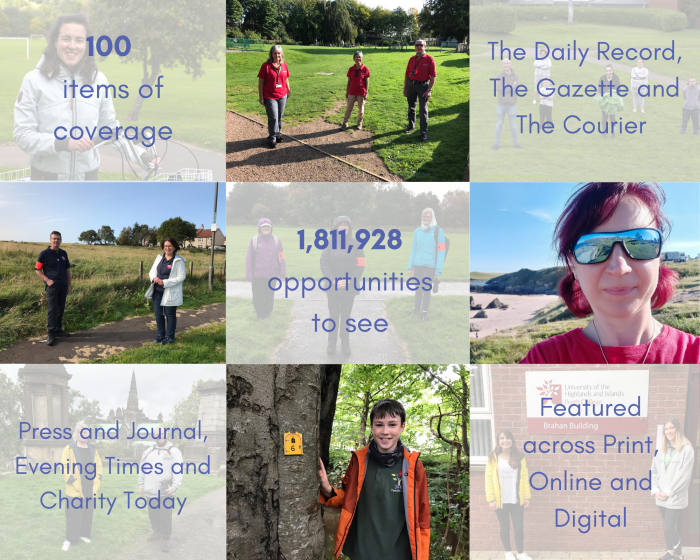 WALKING CHARITY, Paths for All covered miles of media coverage for their annual Volunteer Awards with the help of Scottish PR experts.

Every year the HPR team look forward to working with the charity to highlight the amazing work that is carried out across the country everyday by volunteers, this year was no different – despite having to host the ceremony online.

We shared the amazing work and stories of 21 volunteers with the Scottish media and achieved an incredible array of successes.

Let’s go back to the start…

Holyrood PR initially reached out and set up phone calls with 21 volunteers to find out more about their stories and amazing projects which were happening in every corner of the country.

After speaking with the volunteers, HPR drafted up a quote for each individual and began the sign off process.

Once all quotes were signed off and approved we began drafting the main releases, honing in on those special elements to make the human-interest angles shine, targeting each release regionally.

A few weeks prior to the event we issued the releases of the individual volunteers nominated for the prestigious award, and later followed up with 13 winners release sharing the inspiring work and why they have been selected as the winner.

The team at Holyrood PR thoroughly enjoyed working on this project and were amazing by the work of volunteers across the country, even during a pandemic they were still looking out for those in the local area.

The media success achieved is the icing on the cake for this project as it is a well-deserved recognition of hard work and dedication of the regional Paths for All projects.

HPR helped created valuable coverage and put the volunteer stories in front of readers who wanted want to read about local news and people, as well as those publications with a biggest readership.

Our team of PR experts attracted a variety of audiences by targeting a range of different media outlets. By gaining coverage across Scotland, we were able to spread the good news to those who know of Paths for All, while also engaging those who didn’t with the success.

The virtual awards ceremony was hosted by BBC’s Scotland’s Fiona Stalker on November 4.

Interested in hearing how you can reach your target audience with the help of our Scottish PR experts?