Scottish Water reaches milestone in 250,000 bottles saved from Top up Tap use 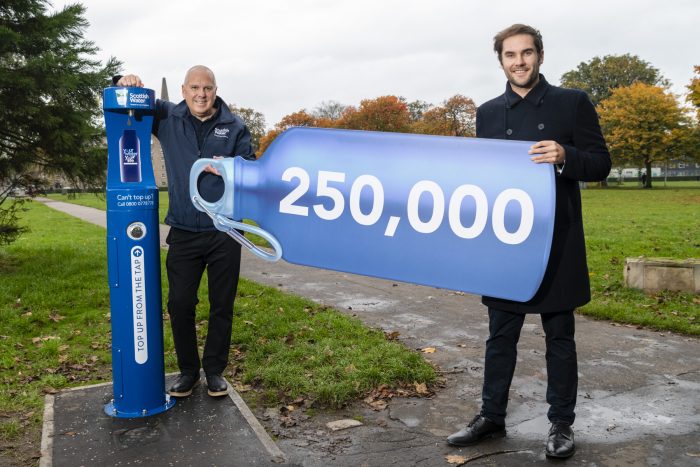 A Scotland-wide network of public Top up Taps has saved the equivalent of 250,000 plastic bottles through people topping up their refillable bottles while on the move.

The Top up Taps are part of Scottish Water’s Your Water Your Life campaign which aims to encourage people to top up from the tap to benefit the planet, their health and their pocket.

Brian Lironi, Director of Corporate Affairs at Scottish Water, said: “We know that people in Scotland share our passion for our country’s great-tasting tap water as well as doing our bit for protecting the environment and improving health. It’s fantastic that our Top up Taps programme remains on track to deliver a national network of 70 refill points by March 2021.

“It means people out and about can stay hydrated by filling up for free with high quality public tap water – this is ‘your’ water after all, so we want to make sure you can enjoy it as easy and often as possible.

“There’s a growing appetite from the public to fill up their reusable bottles, and in these changing times it is more important than ever to take a refillable bottle with you and have your own fresh, clear water while you’re on the go.

“We want to thank Scotland for supporting our Top up Taps and to help to achieve the amazing milestone of reaching the equivalent of 250,000 bottles saved.

“Hopefully it becomes the norm for people to seek out our Top Up Taps around Scotland and take their bottles with them whenever they go out.” 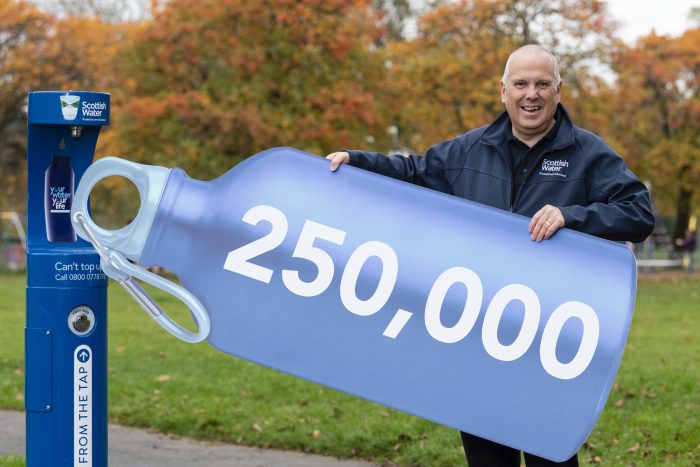 Environment Secretary Roseanna Cunningham said: “Long-term initiatives such as Top up Taps are essential in helping to tackle our throwaway culture and in encouraging people to reduce and reuse.

“Single-use plastic products are not only wasteful but generate unnecessary litter that blights our beautiful beaches and green spaces while threatening our wildlife on land and at sea.

“I look forward to seeing the Top up Taps roll out further across Scotland, making them accessible to communities the length and breadth of the country and I would like to thank Scottish Water for taking action on this important issue. This drive to cut waste will be further complemented by the introduction of our Deposit Return Scheme – the first scheme of its kind in the UK – which will place a 20p deposit on drinks bottles and cans.”

Adam McVey, Council Leader with City of Edinburgh Council, said: “These five new Top Up Taps across the city will help all of us cut down on single-use plastic and it’s encouraging to hear how well the existing taps have already been used.

“The Council has a strong commitment to reduce plastic in the Capital and expanding the number of points people can refill their own bottles will help us eradicate the use of disposable plastic and ultimately tackle climate change in our city. These taps make it even easier for us to stay hydrated in a sustainable way when we’re out and about and I know Edinburgh residents will continue to make great use of the new taps once installed.

“Access to drinking water refilling points is an issue I’ve personally raised with Scottish Water and I’m delighted they’ve been so engaged in helping Edinburgers do their bit to contribute to a green future for our city.” 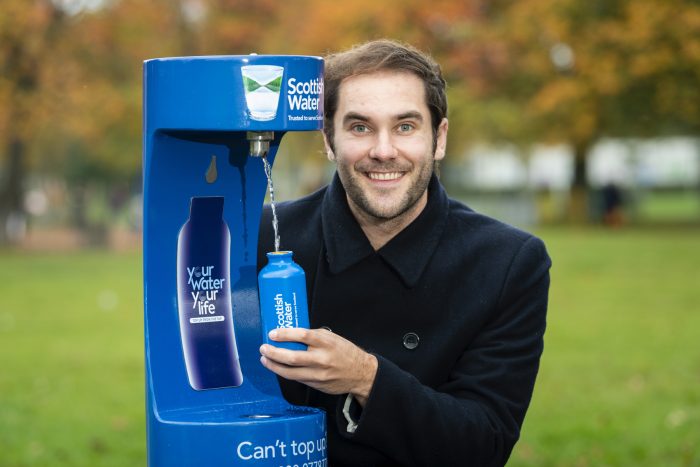 Catherine Gee, Operations Director with Keep Scotland Beautiful said, “The unsustainable production, distribution, consumption and disposal of the thousands of single use items used every day in Scotland is inextricably linked to the most serious environmental challenges of our time  – climate change and biodiversity loss.

“And litter exemplifies the disregard we have for disposable items – with two out of five sites in Scotland recording drinks related litter.  We welcome the roll out of Scottish Water’s water refill stations which promote reuse and make it easy for people to make more sustainable choices and reduce plastic waste and litter.”

Each of the distinctive, high-tech water stations is plumbed directly into the public water supply and each has digital tracking technology which logs how much water is being used and how much plastic potentially saved.

A full list of the current and planned Top up Taps is available on a dedicated website https://www.yourwateryourlife.co.uk/

Do you want your milestone stories shared with the world? Don’t hesitate to get in touch with our team of Scottish PR experts today

Give us a call on 0131 561 2244 or take a few seconds to fill in the contact form below and someone will get straight back to you: