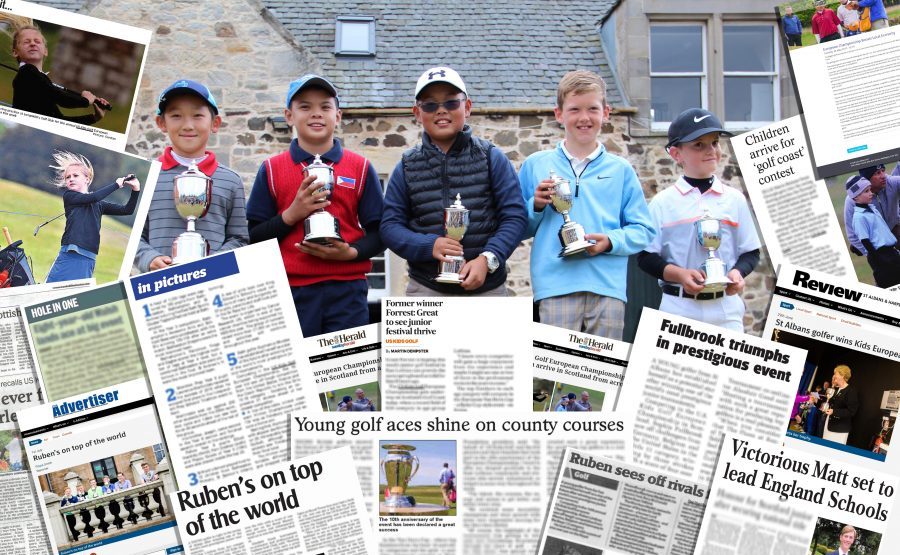 THE TENTH anniversary of the Europe’s biggest golfing tournament promised from the very start to provide a plethora of interesting stories and this gala event didn’t disappoint.

The U.S. Kids Golf European Championship saw hundreds of children from every corner of the globe flock to Scotland to play some of its most historic courses and face-off in some thrilling action.

We took a multi-faceted approach to this campaign, hitting local media and specialist titles as well as some of the world’s most renowned print outlets and Scotland’s two biggest broadcasters.

Stepping onto the first tee in the right mind-frame is vitally important for golfers of every age and ability, so getting off on the right foot was key to our campaign.

We set up local and Scotland-wide coverage centring on a record field in the prestigious contests tenth year.

The East Lothian Courier, The Scotsman and the Edinburgh Evening News got the story out to potential spectators and golf fans across the country and closer to home.

Not content with this stellar line-up we were able to land showpiece broadcast hits with STV and the BBC.

BBC Radio Scotland’s ‘Newsdrive’ conducted an interview with the tournament organisers while STV News rounded off the pre-play media.

How did we whip up this media storm? Take a look at the initial story that got tongues wagging

The European Championship has become a fixture of East Lothian since it first came to these parts 10 years ago and has played an important role with the community.

We kept the good-will coming with a release outlining the amazing contribution players and their families make to the economy of this beautiful part of the world.

During the week of the tournament we put on our story-spotting plus-fours and golf spikes and searched the fairways for interesting media-worthy nuggets.

Holes-in-one, course records and stunning shots abounded and set us up for some exciting hits in the East Lothian Courier, the Dublin Gazette and the Scottish Daily Mail.

We’re a multi-media agency and writing and relations are only a part of our strategy. Take a peak at some of the tournament’s user generated video as we caught up with some of the competitors

And the Winner is…

A friendly competition did not lack for fantastic play and we were on hand to ensure incredible coverage on both sides of the border for the UK based winners.

A whole host of hits in all corners of England and Scotland followed bringing the U.S. Kids Golf brand to an ever increasing audience.

Across the tournament and its run-up we gained U.S. Kids Golf:

Could your business benefit from coverage driven by our Scottish PR Agency?