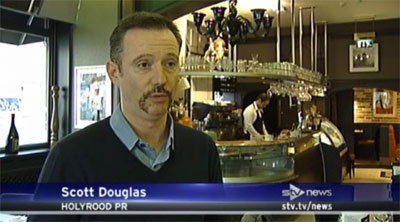 On Friday, our very own Scott Douglas appeared on STV Glasgow’s Six O’Clock news commenting on the importance of social media for businesses wishing to boost their presence.

Scott, a recognised expert in Social Media, brought in his expertise as part of a wider story on the decision of Rangers Football Club to begin tweeting their game commentary in Hindi.

This new venture aims to target the 258 million Hindi speakers in India and will act as a starting point for the club in strengthening their brand internationally, with tweets in Italian and Arabic to follow.

Scott and his moustache joined Edinburgh restaurateur Tony Crolla, owner of the Vittoria group restaurants, in commenting on how smaller companies as well as larger corporations are joining the social media revolution to optimise and increase their brands.

Holyrood PR recently worked with Tony to show him how social media could benefit his Edinburgh restaurants, Vittoria, La Favorita and Divino Enoteca.

We created a special 2 for 1 offer which was only available to followers of their social media pages.  In six months, the group established almost 2000 Twitter followers and 750 Facebook likes which generated over 700 bookings.

Tony was thrilled with the results of the campaign, he said: “I was unsure what value social media would bring to the business, but Holyrood PR not only expertly and creatively took charge at every stage, they delivered superb results.  It was an amazing eye-opener to see what could be achieved.”

Holyrood PR’s Social Media campaign with Vittoria also received a Silver Award at this year’s CIPR Pride Awards in the Best Use Of Social Media category.

If you would like to take a look at Scott’s big appearance, the story begins at 13 minutes in.

Holyrood PR provide social media expertise for a range of clients across Scotland and the UK.