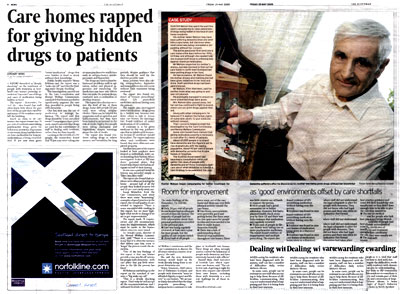 A report produced by the Scottish regulator the Care Commission has resulted in major coverage in Scotland’s best-known quality newspaper.

The Scotsman carried a two page article into the findings of an official report produced jointly by the Care Commission and the Mental Welfare Commission.

Entitled Remember, I’m Still Me, the report’s findings were based on inspections visits to 30 care homes for older people in Scotland.

It found excessive use of drugs and medication being hidden in food to treat people with dementia – and it concluded care homes need to significantly improver the care provided to sufferers.

The Scotsman also reported comments from health minister Shona Robison, who described the findings as a “wake up call”.

As part of its awareness raising campaign the Care Commission tasked public relations experts Holyrood PR to handle the PR in Scotland for the report.

The full article by The Scotsman’s health reporter, Lyndsay Moss is available to read online.