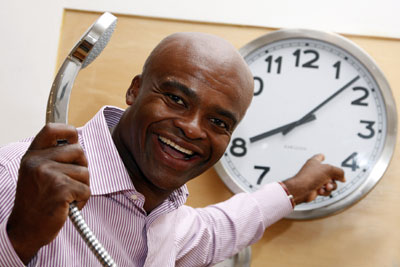 Scots spend longer in the shower than those in the rest of the UK, according to the findings of a new poll.

The survey by Scottish Water and other UK water companies also disples the myth that women take more time in the shower than men.

Findings of the ICM poll show that more than a third (35%) of Scots said they take ten minutes scrubbing, shampooing and sprucing up in the shower. The UK average is just 28%.

Some Scots go even further in their quest for cleanliness, with eight per cent admitting to a decadent 20 minutes getting squeaky clean and five per cent taking 15 minutes. However, over a third (34%) of Scots take less than ten minutes. And 23 per cent take a swift five minutes or less to scrub up.

The research, performed on behalf of 12 UK water businesses, including Scottish Water and also reveals that on average women spend just 39 seconds longer in the shower than men.

“The amount of water we each use daily at home – about 150 litres – is unsustainable and hot water is the second largest consumer of energy in the home after space heating,” said Jacob Tompkins, Managing Director of Waterwise, the leading water efficiency authority in the UK.

Some people like to spend more time taking a shower, because they want to warm themselves up. This being the case, you can install shower doors, to keep your shower a warmer place. If you are interested, learn more from Superior Shower Door & More.

With a typical electric shower using around 6 litres of water a minute, people who shower for a long time are using as much water as a bath (typically 80 litres a fill) – or in some cases more.

For more information about Shower power, to calculate the amount of water you use in the shower and to enter a competition to win one of thousands of water efficient products visit www.waterwise.org.uk/showerpower.