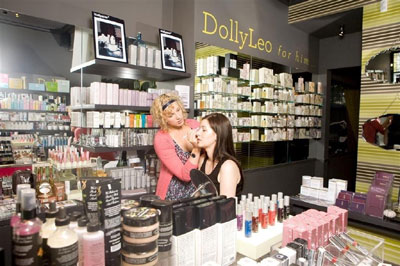 Shy Scots women need to come out of the ‘Botox closet’ and feel happy to admit to having treatments to help them look younger, a leading skin care expert has claimed.

Celebrity make-up artist Sadie Jean Sloss said it was amiss that women from Scotland feel less enthusiastic in wanting to talk about using the age defying treatment than those south of the border.

Sadie earned her credentials in London, working on top beauty programmes Britain’s Next Top Model and Make Me a Supermodel UK and also with renowned make-up artists Jemma Kidd and Ginni Bogado on high-profile clothes campaigns such as the Marks and Spencer advert with Twiggy and Myleene Klass.

She then moved home to Edinburgh in 2008 to open up-market skin care boutique DollyLeo Apothecary which boasts a specialist Botox treatment centre run by a highly regarded plastic surgeon.

But Sadie said she was surprised to discover after opening DollyLeo Apothecary that Scottish women appear reluctant to talk about or use Botox to minimise or smooth out lines and wrinkles on the face.

Sadie said: “Botox is a common discussion topic in London. Women there often are very happy to admit to having had Botox as a sign that they are taking care of their looks.

“However, while many women in Scotland have used Botox, they tend to keep it to themselves. The suggestion is that they are too embarrassed to admit to having the treatment so they keep quiet about it.

“That shouldn’t be the case. Botox achieves fantastic results and women in Scotland should feel proud about showing they take such pride in their appearance.

“Stars like supermodel Linda Evangelista and Ugly Betty’s Vanessa William readily attribute Botox to helping them achieve a timeless look, so there’s no reason for women in Scotland to remain in the Botox closet.

“We have a number of clients who have been delighted after having treatments.  They tend to be older women who have the treatment for a one-off special occasion or women in their 30s and 40s who are looking to minimise established fine lines and wrinkles.

“But really there’s no reason why women in Scotland shouldn’t follow the lead of those in London, where a large majority have had Botox by the time they are 25.”

Sadie Jean Sloss also offered some words of advice to those who want to benefit from non-surgical cosmetic enhancement treatments such as Botox.

“As a general rule you should look for treatments which have been approved by the FDA in America where they have a more robust process of approving new products. And, as always, if you come across a treatment or clinic which sounds too good to be true, the chances are it probably is.”

Leading Edinburgh plastic surgeon Mark Butterworth agrees with Sadie. The renowned surgeon is a member of the Edinburgh Plastic Surgeons LLP, and carries out Botox Restylane and Juvederm treatments within Dollyleo Apothecary.

He said: “Botox is definitely not discussed in Scotland in the same way it is in England.

“I would suggest that this is in part due to London women being more inclined to subscribe to the transatlantic attitude to plastic surgery – a trend that isn’t so apparent in Scotland.

“Botox is worn in America like a badge of honour. Women in the US also tend to opt for a very distinctive overly Botox-ed look, which is considered a cultural norm.

“However, in Scotland the majority of my clients want a more natural look.

“My personal philosophy is that you shouldn’t be able to tell if a person has had Botox if the treatment is done correctly. The procedure is risk free and safe and when carried out skillfully the effect should look completely natural.”

Dr Butterworth, who also carries out plastic surgery treatments at Edinburgh’s St John’s Hospital and the Spire Murrayfield Hospital, added: “The majority of my regular Botox clients are in the 30 to 40 age bracket.

“I do also have a number of older women who have Botox as a one off treatment for a special occasion such as reunions and weddings.

“But in general I’ve found the women having these treatments want to look fresh faced but without having to admit to having Botox to achieve the look.”