Scots Can Shop Till They Drop With New Primark Store 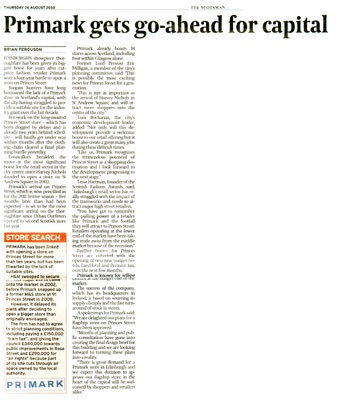 PR Scotland is in the bag for Primark with stylish Scotsman coverage.

Primark’s latest bid to create a flagship store for Scotland, has been succesfully completed, after a four year battle to start work on the site on one of Scotland’s most historic shopping streets.

The multi-million pound retail investment will provide over 75,000 suqare feet of shopping space on Edinburgh’s Princes Street – providing a much needed boost to the capital’s thoroughfare.

Work will now begin on the site, with constructions expected to be completed by December 2011. The former Marks and Spencer site, will undergo a complete demolition and will then be reconfigured to create the flagship store.

Primark’s arrival on Princes Street, will provide a whole host of econbomical benefits, not only attracting more shoppers and toursits to the area, but also helping improve employment levels.

As well as retail jobs, hundreds of constuction jobs are expected to be created as the construction team behind the site will seek to hire local sub contractors to aid work on the site.

Tessa Hartman founder of the Scottish Fashion Awards quotes in the article: “Edinburgh’s retail sector has recently struggled with the impact of the tramworks and needs to attract major high street retailers.

“You have got to rememeber the pulling power of a retailer like Primark and the footfall they will attract to Princes Street. Retailers at the lower end of the market have been taking trade away from the middle market because of the recession.”

A spokesperson for Primark also quotes in the article: “We are delighted our plans for a flagship store on Princes Street have been approved.

“Months of planning and public consultation have gone intro creating the final design brief for this building and we are looking forward to turning these plans into a reality.”

In order to ensure that the building matched the requirements of the historical Princes Street sight, Primark undertook a lengthy public consultation process, listening to public opinion and suggestion to the proposal, using the feedback to reaffirm the final design.

Memebers of the public were invited to give their opinion via a specially comissioned website – which attracted over 7,000 users over a three month period.

Primark’s spokesperson added: “There is great demand for a Primark store in Edinburgh and we expect this decision to approve our flagship store in the heart of the capital will be welcomed by shoppers and retailers alike.”

The full article can be read on the Scotsman’s website and was secured as part of a sustained PR and stakeholder campaign carried out by the Holyrood PR.