Survey shows walking has made Scotland a happier and healthier country. 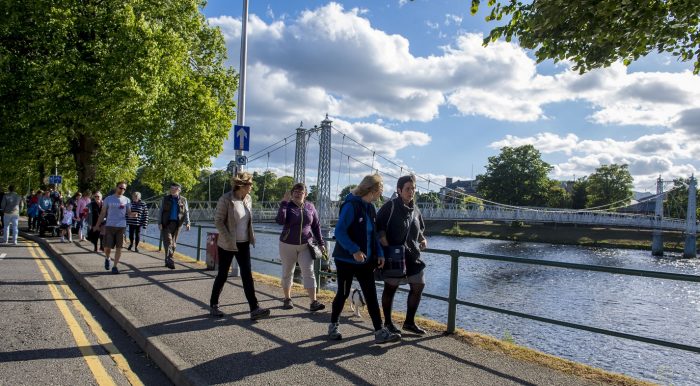 SCOTS are walking more now than they were five years ago.

In a survey commissioned by Scotland’s walking charity, Paths for All, 42% reported that they were walking more often, listing health reasons or a change in personal circumstances, such as having more time or moving house, as the most common reasons for walking more.

55% of Scottish adults reported walking every day and 26% said they walk several times a week.

The results come as the public are being encouraged to have their say on the National Transport Strategy – Transport Scotland’s vision to reform the transport system, protect the climate and improve lives – before 23rd October.

When respondents were asked about their priorities if they moved house, the majority of Scots said that being able to walk to local shops and other amenities was more important than convenience by car.

64% of people also thought that being within walking distance of a regular bus service was important.

Ian Findlay CBE, Chief Officer at Paths for All, said: “Our survey reveals interesting insights into the links between public transport and its influence in increasing walking.

“It also suggests people would like to be more active as they travel, but there are some barriers to overcome.”

The survey found that 55% of Scottish adults had walked to a public transport link as part of a longer journey in the last month.

Leisure and exercise were the most common motivations to walking. Though when walking was considered as a form of ‘Active Travel’, as opposed to a leisure activity, only 15% of Scots said they would walk more than 20 minutes to reach shops, schools and other local services.

7% reported that they walk less often than once a week, while 2% stated that they never walked. Among these groups, health issues, disability and car ownership were the key reasons for walking little or not at all.

In the survey, ‘walking’ included walking to a station or bus stop, dog walking and travel to and from shops.

Ian added: “We’ve made some great progress over the past five years as we aim to achieve a happier and healthier Scotland.

“We strongly believe that Scotland has the potential to become one of the most walking friendly countries in the world and aim to make this happen by delivering a National Transport Strategy that reflects Scotland’s culture.

“One of our key priorities is to move many more of us out the private car and choose to walk, cycle and take public transport instead.

“Responses and engagement from the public is key to ensuring that our National Transport Strategy is both realistic and achievable, so we urge you to review the consultation paper and share your views.”

The National Transport Strategy aims for a sustainable, inclusive and accessible transport system.

The consultation paper is now open for response until the end of October. To have your say, visit: https://consult.gov.scot/transport-scotland/national-transport-strategy/

Over 1000 people were questioned in the survey with the sample being drawn from a panel of c.30,000 adults in Scotland. Quota controls were used to obtain a sample distribution that is representative of the Scottish population.

Could our health PR experts help your organisation?