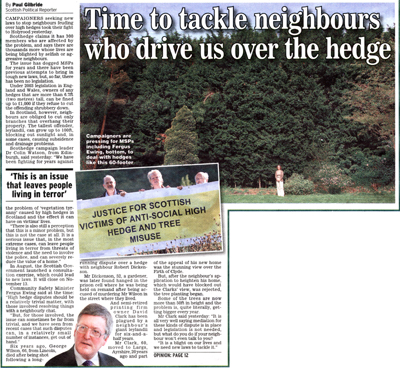 A campaign against high hedges and overgrown foliage made the news after Scothedge’s high profile visit to the Scottish parliament. The group met a cross party group of MSPs to highlight their campaign to change the law on how high hedges and trees are allowed to grow.

The Daily Express reported on the problem of overgrown vegetation blighting the lives hundreds of people in Scotland. The group aimed to publicise a Scottish Government consultation on how the problem can be solved – which runs unti November 13.

The newspaper ran the headline: “Time to tackle neighbours who drive us over the hedge” as to told how people suffered because of “vegetation violence”.

The campaign group are using the services of Holyrood PR PR in Edinburgh to gain press coverage of their ongoing campaign.