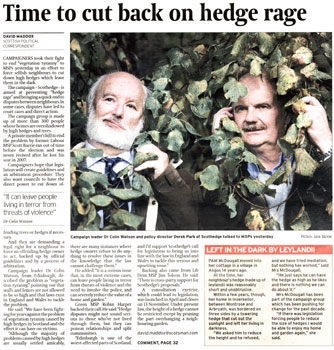 Scotland’s national newspaper The Scotsman has given campaign group Scothedge cause for cheer after featuring its petition against high hedges and “vegetation tyranny” in its news pages.

The prestigious Scottish title focussed on how the campaign group, which was set up to highlight the problem of neighbour disputes over high hedges, had taken its fight to the MSPs outside the Scottish Parliament.

Scothedge is currently campaigning to highlight a public consultation into the issue of high hedges, which has been set up by the Scottish Government. The consultation aims to look at whether to introduce legislation in Scotland to limit the height that residents can grow hedges and tress in private gardens, and to allow councils to take action in disputes.

The full story appeared in The Scotsman and was the result of a sustained media campaign for Scothedge which is being carried out by Edinburgh public relations experts Holyrood PR PR in Scotland.