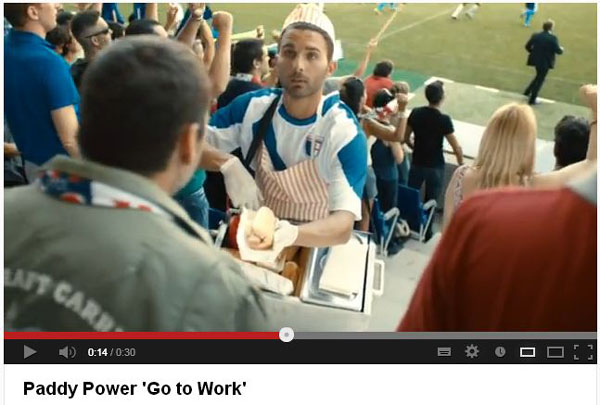 Paddy Power has done it again with another wisecracking advert poking fun at high-earning footballers. The betting giants are well known for their tongue-in-cheek ads and the latest billboard campaign surpasses my expectations anyway. After a comment was made on the bookies’ Facebook asking why players were being paid millions to sit on the bench, the concept of #2ndjobsfirsubs was born. A spokesman at Paddy Power was adamant that the campaign was of course in the clubs best interests “We want to help clubs out in any way we can and making the most of a squad’s talents, whether that’s driving the team bus or flipping the buyers outside the ground, has never been more crucial. We’re calling on managers to do the right thing and make #2ndjobsforsubs a reality.”
http://www.thedrum.com/news/2013/02/22/get-bench-and-get-job-paddy-power-tells-english-premiership-stars-new-ad-campaign

app.net is one of the newest social network sites which rather than being funded by advertisers, it is being funded by members paying a monthly or yearly subscription fee. app.net was developed by Mixed Media Labs who intend for it to be run by the users rather than the advertisers, thus the website will be void of any advertisements. It is designed similar to twitter but as stated above is without the ads that plague the 140 character social network. App.net also have a mobile application for iPhone and Android users.
https://join.app.net/

I KNEW YOU WERE A GOAT WHEN YOU WALKED IN (Lewis)

For those who have not seen the latest video circulating around YouTube and social media channels, this fantastic video of the Taylor Swift ‘I knew you were trouble’ blending with a goat screaming like a human has had me and everyone I have shown laughing. What I think is great about this video is the simplicity of it, but also the creativeness to mix a pop song with a screaming goat. This should cheer up your Monday blues.
http://youtu.be/cpfQSqfpuac

As you have probably heard or seen in the media recently, Russia had a meteorite explode over a city with many people being injured from broken glass or the momentum from the explosion. That seems like enough already, but back in 1954, a woman was directly hit by a meteor…and survived.
Ann Hodges was hit by softball-sized meteorite, which broke through her ceiling and bounced of a radio before it hit her in her thigh. Out of anyone who has ever lived on the earth, she is the only recorded person to ever get hit by a meteorite.
http://www.gizmodo.co.uk/2013/02/the-only-woman-who-ever-got-hit-by-a-meteorite-survived/

A helicopter swooped down on a prison courtyard on Sunday, as armed men on board fired on guards and lowered a rope to help a convicted killer make his fourth attempt to escape. The plot was foiled after prisoner trying to escape was accidentally shot and the helicopter was forced to park in the prison car park. Not your average Sunday afternoon by any means.
http://hosted.ap.org/dynamic/stories/E/EU_GREECE_ESCAPE_FOILED?SITE=RIPAW&SECTION=HOME&TEMPLATE=DEFAULT