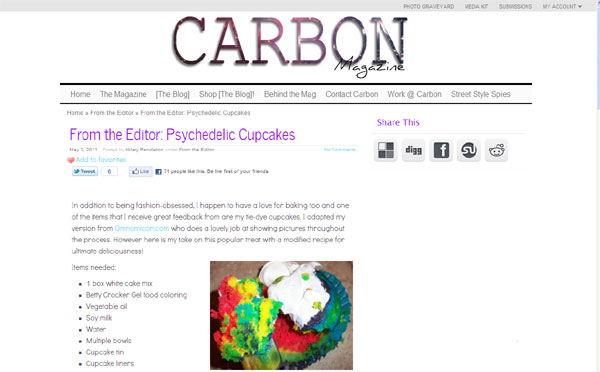 Fancy bringing something a little bit different to your next party? How about some psychedelic cupcakes? Not only will they look cool, but you and your food will be the talk of the event. Talk about simple ways to make you popular!

Ever one for modesty Lewis Hamilton has complained that he didn’t have enough time to savour the glory of his victory at the German Grand Prix this weekend, because the national anthem is too short. Drivers from other countries got to bask in the lime light, because their anthems are considerably longer than our ‘God Save the Queen’ which lasts just 44.4 secs. Fair enough we all want our moment in the sun, but it’s a bit much to ask us to change something which has been a part of cultural history, for hundreds of years!

I don’t usually plug individual companies or services unless they provide something worthwhile to the online geek community. So, as this is one of my regular go-to websites, I feel obligated to share the delights of TeeFury to a wider audience. Now, the interwebs are full of clothing stores selling a wide array of geeky merchandise and mash-up T-shirts, but in my opinion none of them can hold a candle to this one. The concept for Teefury is simple – every day there is a different T-shirt designed by an independent artist that is put up for sale, but it is only available for 24 hours. After that, it disappears back into the online ether. Shirts tend to feature most of the main nerd properties – such as Star Wars, Trek, Buffy, Potter, Doctor Who and Firefly – but the designs are often outstanding. You can see a selection of previous shirts on the company’s facebook page for reference, but you can only purchase them on the day they are released so daily visits to the site are an absolute must. Unfortunately the website currently only exists in the United States so shipping is costly, but I’m hopeful an entrepreneurial Brit will take up the franchise soon.

I watch with interest how the fast-changing pace of social media can trip up even the most seasoned communications veteran.  This week, it was the turn of Scottish marketer and PR professional Tricia Fox, of Volpa PR in Perth. In her inaugural blog for the small business section of the recently launched UK-version of the Huffington Post, she chose to write about the death of Amy Winehouse – and the lessons small businesses can learn from it. As well as attracting a raft of negative comments, Tricia was also criticised on her Twitter and Facebook pages and at one point Tweeted out: “Has today witnessed staggering levels of bullying. Absolutely unacceptable.” Here is her blog apology, issued today, giving her account of events:

An Australian fast-food outlet has created a 1500 calorific burger to attract media attention in what has been described as a “competitive market”. The OMG Double Double burger, from independent Brisbane outlet Chompers, contains two burgers, two slices of cheese, bacon and lettuce sandwiched between two Krispy Kreme doughnuts. Mmmmm – artery clogging stuff. Although the creation is not original (not surprisingly Americans were the first to combine doughnuts and burgers) it has caught the attention of diners through social media and word of mouth. But is this irresponsible marketing, creating something that is the equivalent of a day’s calorie consumption? On one hand, probably no-one would (or could) eat this every day, but in a world where we’re trying to reduce the amount of crap we feed future generations, is this not just a total boycott? And finally – would you try one?