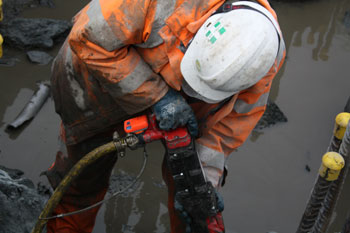 An innovative safety device designed to prevent injuries among workers using vibrating power tools has played a vital role in one of Scotland’s biggest transport projects.

The HAVmeter – a small device that records workers’ exposure to vibration levels – has been used extensively during the £465 million M74 Interlink JV project in order to improve safety among hundreds of people working on the ambitious transport scheme.

The innovative safety equipment is produced by Edinburgh-based engineering firm Reactec and is used to minimise the risk of workers contracting Hand Arm Vibration Syndrome (HAVS) – one of the biggest dangers associated with using hand held vibrating power tools.

The technology measures and records the trigger time and vibration levels and ensures machinery operators do not exceed the recommended levels stipulated by the Health & Safety Executive.

The M74 project – which is creating a new link from the M74 to Glasgow – has also demonstrated the resilience of the HAVmeter technology, after one of the devices became trapped in mud and ice during the two-month blizzards that ravaged Scotland over the winter.

Workers on the project found the missing meter after the ice had thawed – but were amazed when they re-charged the device and discovered that it still worked perfectly, despite its prolonged exposure to sub zero temperatures.

Jim O’Hagan, managing director at Reactec, said: “Our HAVmeters are already regarded as the best safety device on the market by many of the biggest names in the construction and hire service sectors.

“However, we’re still delighted that our technology has now been used to maintain safety during the biggest transport project in Scotland for decades. The M74 Interlink JV is a major development in Scotland’s infrastructure, involving a peak of 900 workers, so it’s very pleasing that so many of them have been using HAVmeters to monitor their exposure to vibration.

“Hand Arm Vibration Syndrome is one of the biggest health risks facing construction and streetworks teams in the UK and there is no better product than the HAVmeter for reducing the risk of contracting the disease.

“We’re also delighted that the tough conditions in recent months have proved the ultimate test for our technology and that we have passed with flying colours. It’s great to see that, even after being trapped in the snow and mud for two months, a HAVmeters will still work just as well as if they were brand new.”

Davie Teasdale, Site Foreman at Interlink M74 Project, added that his team had been astounded by the resilience of the HAVmeter technology after it had been submerged in mud and ice for two months.

He added that after finding the device, the team had recharged the meter on its Basestation and were shocked to find that, despite being completely submerged for months, it was still fully functioning.

He said: “I couldn’t believe the HAVmeter could survive those conditions. When we saw it slip into a flooded cavity, we thought we’d never see it again.

“However, when we found it again two months later, we just took it out, wiped it down, and carried on using it. It is a very impressive and resilient piece of technology.”

PR in Scotland for safety devices

The M74 Completion project is a multi-million pound scheme designed to complete a vital part of the west of Scotland’s motorway network. The new five mile stretch of road will continue the M74 motorway from Fullarton Road Junction, near Carmyle, to the M8 motorway west of the Kingston Bridge.

As one of the largest and most significant construction projects in Scotland, the M74 extension will provide important travel connections for Glasgow and the west of Scotland whilst generating considerable revenue in the run up to the 2014 Commonwealth Games.

Harry Gardner, from Interlink M74, added: “We at the M74 Interlink JV are committed to the safety, health and welfare of our workforce now and into the future.

“We have made a major investment in the HAVmeter kit and are now seeing the benefits of upfront information on exposure to the workforce.”

By using the HAVmeter technology, workers using vibrating power tools and equipment are able to easily monitor and minimise their exposure to hand arm vibration syndrome. More commonly known as Vibration White Finger, the disease affects the functionality of blood vessels resulting in symptoms such as numbness or tingling of the fingers, loss of strength in the hands and the cold whitening of the fingertips.

The symptoms worsen over time, often becoming permanent. If no action is taken to prevent further vibration exposure, sufferers can experience severe pain, resulting in an inability to work in cold or damp conditions or even carry out simple everyday tasks, such as holding a glass.