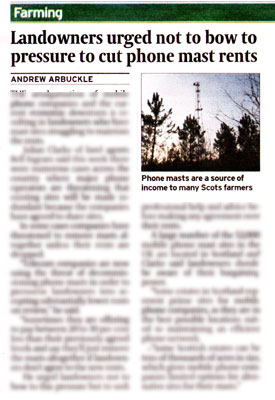 Rural land and estate experts at Bell Ingram have provide comment in a Scotsman article about the pressure landowners are under when it comes to phone mast rents.

Julian Clark at Bell Ingram notes that an amalgamation of mobile phone companies and the current economic downturn is resulting in landowners who have mast site struggling to maintain rent levels.

He quotes in the article: “Telecom companies are now using the threat of decommisioning phone masts in order to lower rents on review.

“Sometimes they are offering 20 – 30 percent less than their previously agreed levels and say they’ll remove masts altogether if landowners don’t agree to the new rents.”

Julian urges landowners who are facing this situation not to bow down under pressure and instead seek professional help and guidance.

He adds that Scottish estates are particularly ripe for this type of rent bartering, as the majority of the UK’s 52,000 phone masts can be found on Scottish land.