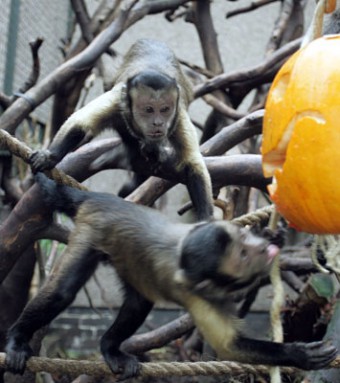 Some naughty little monkey has gone and caused all sorts of unwanted trouble in PR land.

According to this article in The Drum magazine (click here), the culprit has provoked “outrage among the Scottish industry”. Murder polis! It must be serious?

Indeed it is. The ne’er do well has only gone and threatened the status quo by – sharp intake of breath – using Freedom of Information legislation to find out exactly why the Scottish Government has chosen the six agencies appointed to its PR roster.

Well, today I can deliver an exclusive, by unmasking exactly who is posing such a threat to the very fabric of the Scottish PR industry.

Because it is me.

Aye, unlike the nameless accusers in The Drum, I’m happy to put my hands up and be identified.

After all, I’d have to be an awfy hypocrite to make use of legislation set up to ensure transparency in public life – and then try to stay anonymous myself.

In fairness, there isn’t much to The Drum’s story. The “outrage” seems to be limited to one industry insider who is so deeply worried by the risk to the reputation of the sector that they have, er, declined to be identified.

Otherwise the main ingredients are a hodge-podge of guesswork and hyperbole and a rather carelessly large pinch of scaremongering. All finished with a glaze of righteous indignation.

The end result wasn’t quite enough to turn the stomach, but certainly left me squinting with distaste. However, I can’t say I blame The Drum or its reporting staff.

I was a journalist long enough to know that when you have the bones of a story and a vacuum where you’d like the rest of the facts to be, it’s a case of pad it out and run with what you’ve got.

Indeed, fair play to them for managing to spin it out quite as far as they did. The good news for The Drum is that I’ll be approaching them directly to offer an alternative take on events – and hope they’ll get a suitable follow-up story out of it.

For sure there are a couple of the more breathless aspects of its reports that I’d like to clear up. The main points I’ll be taking umbrage with are these:

There is a belief from within the industry that the request has been placed by someone from an agency which failed to make it onto the roster.

And even more bizarrely that:

The Drum has learned that if this is found to be true, the CIRP (sic) is considering what action will be taken against the agency in question.

The Drum fare may have been a tad unpalatable, but I chewed it over and swallowed it down. It’s probably fair to say that this little FOI episode is likely to result in a bout of unwanted indigestion.

Happily that won’t affect me and my cast iron constitution – though I suspect the prospect of this information being made public will be causing an uncomfortable case of gas for some more delicate souls.

Perhaps those who thought all they had to look forward to was all those lucrative Scottish Government’s PR contracts being handed to them on a plate.

Well, over the next few days I’ll be looking forward to regurgitating the finest little tit bits from my FOI exercise – and serving them up right here for your delectation.

And I genuinely hope it might provoke a rather lively little debate – so please don’t be shy about leaving me your comments.