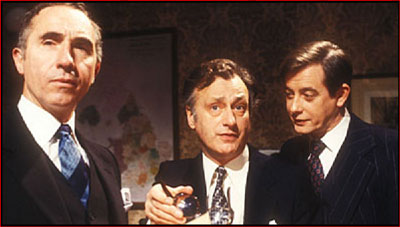 Dire warnings are ringing in my ears.

The kind of warnings that see people failing to realise their mouths are hanging agape while, in hushed tones, they ask with a mixture of awe and pity: “What have you done?”

But for good or ill the can opener has cut its jagged circle and, yep, it has revealed a boil of roiling worms.

Rostergate might yet prove to be my very public undoing. Ho hum.

Certainly someone has already had a friendly word in my shell-like and let me know that my chances of ever (that’s ever) landing work with, through or at the behest of the Scottish Government have evaporated.

For all of 10 seconds I was left asking myself this question: Is it even remotely possible that a civil servant, bureaucrat or other government functionary in charge of procurment could be so spiteful, toxic and bilious that they’d go out of their way to disadvantage me or my agency for years to come, on the strength of a few blog posts insisting their marketing framework is rubbish?

Frankly, I think not – and that doesn’t mean I’ve got some unshakeable faith in the redeeming qualities of human nature. It means that I don’t believe Scotland’s Sir Humphrey’s have the passion, the inclination or the free time for that scale of grudge.

However, Scotland’s PR firmament don’t seem to share my view. Many of the messages of support for my Rostergate revelantions come with the additional request that they remain private.

There seems to be a genuine fear that anyone rocking the boat will be blackballed by the government. For ever. And who’d be stupid enough to jeopardise any future slice of an £80m government spending pot?

Since it would appear my arse is already parsley, I may as well carry on. So onto the first snippet from my various, sympathetic correspondents. While I have pruned this judiciously to respect confidences, I hope it is no less shocking for those careful ommissions:

What really got us about the roster big time is that these agencies were appointed WITHOUT a meeting.
They (the government) did not meet any of the shortlisted agencies, but did it on a box ticking exercise.
And it gets worse because a friend in a public sector agency has had a letter from (name deleted) saying that they expect all public sector organisations to use these agencies as they have negotiated good rates.
So, as you say, we are all cut out of getting public sector work.
We are fuming about it and all power to your elbow.

I’m almost hoping this can’t be right. Surely it is not possible that roster agencies were appointed purely on the strength of how they completed the Invitation to Tender and without any face-to-face meeting?

If so. I think we may be hearing a distinct tap-tap-tap sound. Not only has the box been ticked, but the corpse of poor old credibility has been bundled into it  and the tapping noise is the first nail being tentatively hammered into the lid.

At this point, it is beholden on me to say I can’t account for the veracity of this information. What I can attest to is that it was received in good faith from a highly successful, respected and extremely senior PR professional with a top flight agency.

It also very closely mirrors what Ihave been told myself.

I hope others will feel free to share similar expeirences and stories. Anecdotal evidence will be warmly welcomed – though needless to say I’d almost be prepared to kill for a hard copy of that letter or any like it.

In the interests of balance I willl also happily pass on any supportive messages for the roster system. Should anyone have a credible claim that the roster agencies DID meet face-to-face with government officials as part of the selection process, now’s the time to make that clear.

Likewise, should anyone have clear evidence (preferably written) that the government has no intention of forcing its executive agencies, quangos and NDPBs to use only roster agencies, then feel free to share that too.

Finally, since many seem unwilling to post publicly on this issue, I will collate a selection of the best responses I have received and put them up (anonymised, of course) as a post in their own right over the next few days.

So for any souls who’ve been seething silently over my Rostergate shenanigan, now’s the time to get your hate mail in.