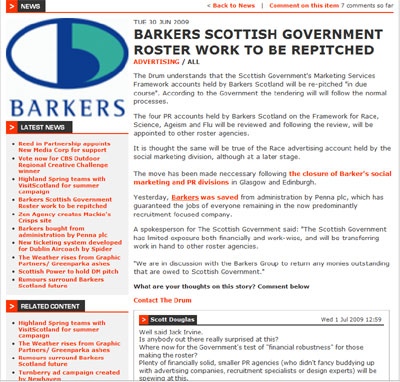 Take one stout jute sack. Insert half a dozen hungry ferrets. Add a scrawny chicken that thinks its the most succulent bird on two legs. Hit with a big stick. Ta da! You’ve got the Scottish Goverment’s PR Roster system.

So haud me back at news that the Scottish Government is to re-pitch four PR accounts previously held by roster agency, Barkers.

What this actually means is beyond me.

Is everybody and their dug in Scottish PR being invited to go through the whole, horrible, draining, demoralising, incomprehensible (and ultimatley for most, unwinnable) tender process again?

Or will the Government simply decide to bump up the agency which finished 7th during the last process (that’ll be Trimedia, with a princely score of 75.87 out of 100)?

Think on this: If they go back out to tender, how mightily p*ssed off would Trimedia be? Legal challenge p*ssed off, perchance?

Yet if they simply award the contract to Trimedia, how raging will that leave the rest of Scottish PR (or at least the five other agencies who made the 12-strong shorlist but got no further, as well as the other 31 agencies who went through the extensive application process, but fell at the first hurdle)?

Words fail me on just how awful and flawed the whole process is. There’s nothing wrong with trying to squeeze the best possible value out of contractors – but this system does nothing for value, nothing for Scottish agencies and, I suspect, delivers little in the way of real value to the taxpayer.

Luckily for me, I’ve saved up tens of thousands of pounds since last venting my spleen on the Rostergate issues.

Now I’m going to give it all to some smarmy consultant to write me a 300 page submission in Government w*nk speak so that I can get onto the roster – probably just in time for the Public Spending bubble to pop in the most spectacular fashion. Ahhhhh.