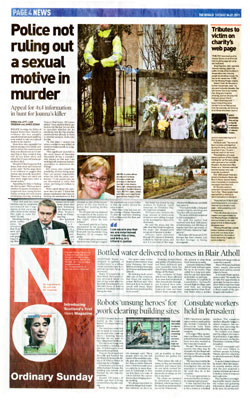 Patton Construction has made the pages of a national newspaper following the unveiling of an unique tool used in their work.

The Herald has run a story regarding the robots which have been on site at their latest project in Edinburgh.

Under the headline “Robots ‘unsung heroes’ for work clearing buildign sites”, the article explains that the robots are a key element in the demolition of the previous structures and layout.

Patton explain in the piece that the robots are an useful aid in the project as the building is not only narrow, but neighboured by two historic properties.

As construction on the flagship Primark store gets underway, Patton is constantly ensuring the safest practice is carried out at every stage fof the process.

Site manager Barrie Henderson is also quoted, saying: “It’s always important to minimise danger and ensure that everyone on site is as safe as possible, so these machines are perfect for this.”

The article can be found on The Herald website was secured as part of a sustained PR campaign carried out by the Holyrood PR.