Edinburgh’s original cool cocktail bar, Rick’s, has reclaimed the title of Scotland’s most stylish drinking destination after an extensive refurbishment.

Rick’s opened in 2000 and quickly established itself as the fore-runner of the capital’s sophisticated style bar scene, serving drinks to a host famous names including Hollywood star James McAvoy, supermodel Kate Moss and Prince William.

Located over three floors in Edinburgh’s historic Frederick Street, Rick’s has undergone an £150,000 revamp and unveiled its new look to the public in time for The Edinburgh Festival.

He said: “Rick’s is back – but in truth we never went away. Rick’s has more than stood the test of time but with our refurbishment, we want people to rediscover the style and service that earned us our reputation as the original cocktail bar.”

Amongst the exciting changes – not least an interior design inspired by 1950’s Madrid and Cuba (which ties in with Rick’s having the greatest number of specialist rums in Edinburgh) – is the launch a stunning range of new and traditional cocktails.

Another key feature of the new-look Rick’s is its new Cabinet Room – an exclusive space for private dining and events with your own dedicated mixologist and waiting staff.

Mixologist Mal Spence – a peerless expert on the science of cocktail-making – has put together an award-winning team of bar staff, acclaimed as the best in Britain, to tempt drinkers. As well as introducing innovative techniques such as freezing and hand-carving individual blocks of ice for each drink, the team has introduced the first ever gallon-sized cocktail shaker to Scotland. 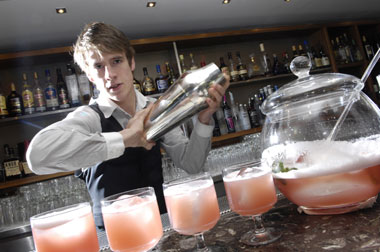 The two-foot shaker, brought over exclusively from New York and whose history dates back to 1930s, will be used to fill a giant punchbowl where drinkers will be invited to scoop out drinks with tiny crystal glasses in a drinking extravaganza called the Ceremony of the Punchbowl

Mal said: “We aim to have Rick’s serving the highest quality cocktails in the UK. Not only will we be offering a comprehensive and exclusive cocktail list, but we will also be educating our clientele in the art of cocktail making through interactive mixology sessions in our Cabinet Room.”

The restaurant menu, which offers everything from a light breakfast to a three course a la carte meal, has been extensively re-vamped by celebrated French chef John Forestier.

John, who has catered for high-profile guests including former French president Jacques Chirac and Prince Philip, aims to create contemporary and stylish food cooked in an imaginative way with the emphasis on flavour and the use of fresh produce from local suppliers.

John said: “I am extremely passionate about cooking and am lucky enough to work alongside a great team of chefs at Rick’s. We think the changes will put Rick’s very much back on the map as one of Scotland’s top eateries.”

Rick’s will also continue to offer a stunning range of 10 individually-designed bedrooms in its boutique hotel, named as one of the world’s top 25 coolest hotels by Conde Nast Traveller.

A design team – lead by independent Edinburgh-based interior designer Joelle Reid – spent nine months researching ideas, fabrics and finishes from around the world to conceive the entire look and feel of the new-look Rick’s.

Joelle said: “Ricks has been designed to grow better with age, like many of the vintage drinks that will be on display in the newly designed cabinet room.  It is certainly not a fashion bar that will be old hat in a few months, it is classic design and will retain this essence for many years.”

David Johnston added: “Ricks is a little jewel in the crown of Edinburgh’s style bar scene.  It has all the atmosphere of the George Street bars – without the bustle and bluster of those establishments.

“We all know that the ethos in the hospitality sector now is about enjoy more – pay less Whatever mood you are in, Rick’s will sort you out.  If you want funky and sophisticated; fantastic and affordable food, dress up or dress down – Rick’s has it all.

“Rick’s is certainly not pushy, ostentatious or glitzy – instead we are about effortless sophistication, vibrancy and vigour. In fact the complete rounded experience.”

Issued for Rick’s by Holyrood PR public relations in Scotland.