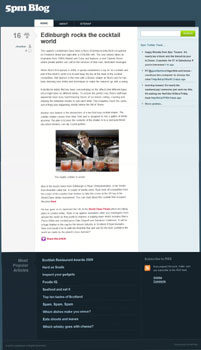 Staff at Edinburgh’s original cocktail bar Ricks have been celebrating after receiving an exclusive piece of coverage in the 5pm Blog.

The website, which reports on developments in the Capital’s food and drink industry, reported on the launch night of the new-look Ricks – which re-opened its doors to drinkers recently.

The bar’s new £150,000 look was inspired by the 1950’s in Madrid and Cuba, and was created by independent Edinburgh designer Joelle Reied. The venue also has an exclusive new space for private dining and events, the Cabinet Room, as well as brand new dining and cocktail menus.

The coverage appeared in the 5pm Blog and came as the result of a media campaign by public relations experts Holyrood PR PR in Edinburgh.