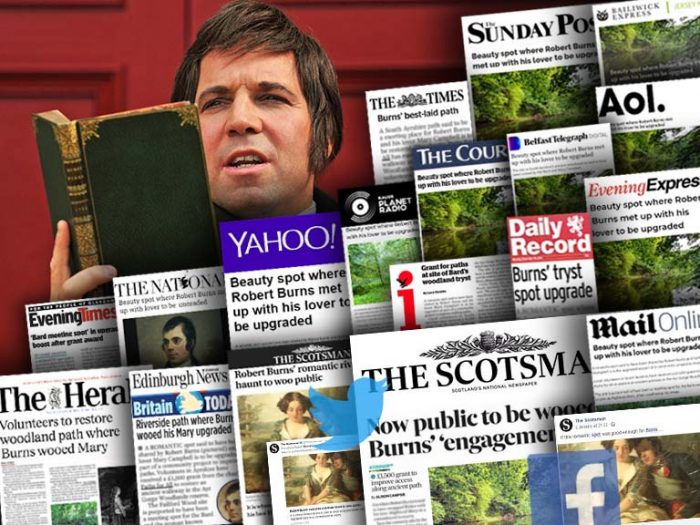 AS HOMAGES go, a project to revive a beauty spot closely associated with Scotland’s national bard, Rabbie Burns, is a highly unusual example.

So, we helped Scotland’s leading walking charity generate massive amounts of UK-wide media coverage when it provided a grant to help restore the fabled site where Burns proposed to Highland Mary.

The results were beyond the wildest expectations of our client, Paths For All, a charity committed to improving the physical and mental health and wellbeing of Scots by encouraging people to walk in the great outdoors. Highlights included:

Paths For All provided a grant to volunteers with South Ayrshire Paths Initiative  to carry out the improvement works along an ancient path in Ayr Gorge, where Burns is said to have got engaged to his sweetheart.

The work will include repairing and replacing decaying wooden steps, making the path accessible to any interested in visiting a beauty spot which played such an interesting role in Scotland’s cultural history.

Successfully sharing news of Paths for All’s support of local initiatives raise awareness of its work and builds its reputation as Scotland’s leading walking charity, which provides grants to worthwhile projects while creating a healthier and happier nation.

As an added bonus, the extensive coverage in this case was also a boost to the other partners involved in the project, including  the Scottish Wildlife Trust and South Ayrshire Council’s Outdoor Access Office.

We’ve helped hundreds of business and organisations to stand out – isn’t it time you discovered the power of award winning public relations?

And it’s not just charity PR we specialise in. We’ve been providing expert media relations to clients across a range of sectors for years – why not find what our award winning agency could do to boost your business?

Getting in touch couldn’t be easier. Give us a call on 0131 561 2244 or fill in the contact form below and one of our friendly team will get straight back to you: