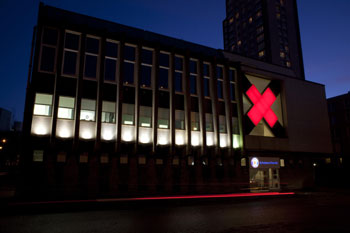 One of Glasgow’s most iconic buildings has been given a new lease of life following a major £1.1 million revamp by workplace design experts Space Solutions.

The St Andrew’s First Aid national headquarters, in Glasgow’s Milton Street, has been extensively refurbished over the past six months to modernise the premises and provide a better working environment for the charity’s staff.

Following its extensive refurbishment, the building was officially re-opened by HRH the Princess Royal – in a ceremony held more than 40 years after her grandmother, the late Queen Mother, first unveiled the Glasgow premises as St Andrew’s Fist Aid’s HQ.

The significance and historical nature of the building meant Space Solutions’ design team had to work closely with a number of agencies, particularly in securing planning permission and consent from Glasgow City Council’s Heritage Section, Planning Department and Historic Scotland.

Victoria Walker, project manager with Space Solutions, said: “We are delighted to have been involved in such a prestigious project. This is a unique building but, as St Andrew’s First Aid’s business and operational needs have changed dramatically over the years, it was clear the premises no longer met their requirements.

“Our challenge was to modernise the building to meet the operating and organisational requirements of the organisation, while fully respecting the character of this Category A-Listed premises.

“The project was complex and demanding but we are very pleased with the outcome, which should benefit St Andrew’s First Aid for many years to come.”

Rudy Crawford, Chairman of St Andrew’s Board of Trustees, said: “We are delighted that this prestigious project has been completed on time and to budget.

“I am sure that our volunteers and training customers will notice a considerable difference when visiting St Andrew’s House, as we continue to prepare the organisation to meet the challenges of the 21st century.”

Space Solutions was appointed through by the St Andrew’s First Aid Executive Board, and co-ordinated all aspects of the project – from design development right through to project management.

PR in Scotland for space experts

Established in 1882, St Andrew’s First Aid has been providing best CPR training in Mississauga, event cover and volunteering opportunities for more than a century

The organisation started as St. Andrew’s Ambulance Association, which was created by a number of doctors and businessmen in Glasgow, who were concerned with the increase in the number of people being injured in the rapidly expanding industrial city. First Aid classes were organised, stretcher stations were set up in chemist shops in central Glasgow and an ambulance was bought.

Over the coming years affiliated branches were formed and ambulance associations in other towns and cities began to join with St Andrew’s.

The Milton Street building has been home to St Andrew’s First Aid since it was opened by HM The Queen Mother in 1970.

Space Solutions is Scotland’s biggest independent expert in helping businesses manage changes within the workplace. It operates UK-wide – from bases in Aberdeen, Edinburgh, Glasgow, Dundee and Livingston – to design, build, fit out, refurbish and relocate modern and productive business environments.