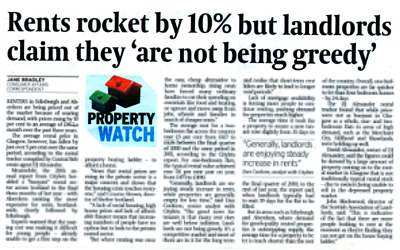 Excellent PR in Scotland with The Scotsman

Scottish rental portal Citylets has wasted no time in giving us a round up of the private rental market for 2011 with their famous data report being published.

The data report which has reached a milestone with the Q4 report being the twentieth consecutive issue has delivered some interesting figures with Aberdeen being revealed as the most expensive city to rent.

According to Dan Cookson, Senior Analyst  at Citylets landlords are enjoying the steady state of the rental market and are not becoming greedy.

He said “Generally landlords are enjoying steady increase in rents while properties are generally empty for less time. The good news for the tenants is that many rent rises are well below inflation. Landlords are not being greedy.

“Its a competitive market and most of them are in it for the long term and realise that short-term rent hikes are likely to lead to longer void periods.”

This coverage was secured with the Scotsman as part of a sustained public relations campaign carried out by www.holyroodpr.co.uk on behalf of Citylets.