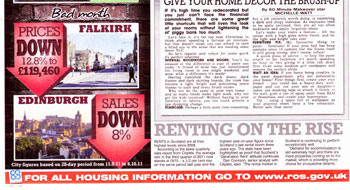 The country’s leading lettings portal has received a major boost to its PR in Scotland after being featured in a best-selling newspaper.

The Citylets quarterly data report was covered in the property pages of The Scottish Sun – the biggest selling newspaper in Scotland – which revealed that rents are continuing to rise across the country.

Widely regarded as Scotland’s best barometer for reviewing the state of the rental market, the latest Citylets report analysed rents and trends for thousands of properties between July and September. The figures showed that rents were rising in Edinburgh, Aberdeen and Glasgow and had seen higher year-on-year increases than at any point since the rental boom of 2008.

The coverage in The Sun was achieved thanks to the expertise of Edinburgh PR experts the Holyrood PR, who maintain and promote Citylets’ impressive public relations presence in Scotland.