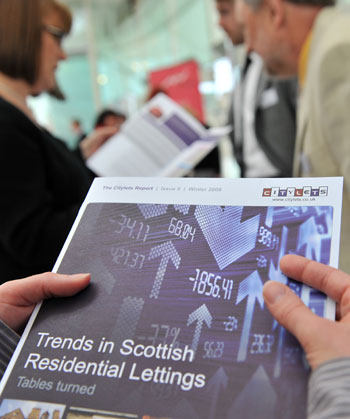 People in Scotland are continuing to shun the property sales market in favour of renting their home, according to new research from Citylets, the country’s leading letting portal.

Citylets has revealed that Scotland’s rental sector is booming as would-be homebuyers who cannot afford to purchase their first property are continuing to rent until the economic conditions improve.

The latest Citylets quarterly data highlights how the ongoing credit crunch, tighter mortgage lending criteria and higher deposit requirements is making it increasingly difficult for first time buyers to take their first step on the property ladder – and many were choosing to remain comfortable in a rented home rather than overstretch themselves by buying a property.

Dan Cookson, senior analyst at Citylets, said: “Although some agents are reporting sales growth at the upper end of the market at the moment, the truth is that many younger people in Scotland simply cannot afford to buy a property. Mortgage lending criteria are still tight and you need to have large deposits in place to purchase properties – which the majority of would-be first time buyers do not possess.

“As a result there has been a high demand for rented properties in Scotland, which shows that the lettings sector is continuing to perform well.”

The latest report, covering the Quarter 1 period between January and March 2010, shows that the average monthly rental in Scotland now stands at £638 – a small rise of 1.3% on the previous quarter and just £1 more than the average rent recorded in Q1 2009.

The report also shows that Scotland’s average time to let figure – a key indicator of demand for the private rental sector – was 41 days in Q1 2010, compared to 48 during the same period in 2009.

The number of properties taking more than four weeks to rent has also fallen and now stands at 51%, compared to 62% in Q1 2009.

Thomas Ashdown, the entrepreneur behind Citylets Network which includes major partner brands such as Findaproperty, S1homes and Primelocation, said that the figures showed a good degree of stability in Scotland’s rental market.

He added: “We have seen unprecedented levels of traffic on the Citylets website in recent months, which indicates that demand for rented accommodation in Scotland remains high and is well balanced now with supply in general which has risen fast over the last 18months.

As a result, rents have stabilized after the falls in 2009 and the reduction in time-to-let figures over the past year means that an upturn in rents is a distinct possibility in 2010 “

* A copy of the report is available online at www.citylets.co.uk/reports/