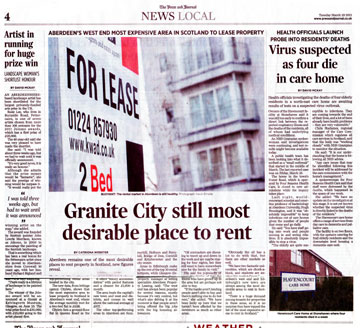 PR in Scotland for rental experts

Scotland’s leading lettings portal Citylets has celebrated another prominent piece of press coverage after being featured in one of the country’s biggest newspapers.

The Press & Journal reporter on new stats released by Citylets showing the country’s rental hotspots – including the top 10 and bottom 10 areas for renting a property.

The stats revealed that Aberdeen and Edinburgh dominated the top of the rental charts, with Aberdeen’s West End highlighted as the most expensive place to rent properties in Scotland. In contrast, Glasgow had five neighbourhoods in the bottom 10 – although Motherwell secured the spot of least expensive area to rent a home.

The stats can be found on the citylets.co.uk and the article is viewable on the Press & Journal website. Citylets is supported by the PR in Scotland expertise of the Holyrood PR.