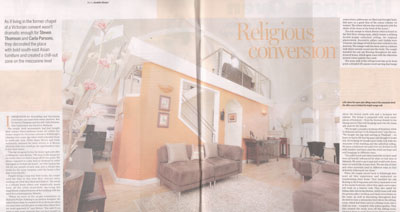 On the same day Steven Thomson and wife Carla Pasons bought their dream home in converted Edinburgh convent their plans hit a snag – Steven landed a new job in Malaysia.

For the next two years the couple kept the property at 4 Mount Alvernia, a former Victorian chapel, while they dreamt of the day they’d be able to return and live in it.

While abroad the accountants gathered ideas and refned their interior design plans. Four years after buying the house they have transformed it and it has now featured in Scotland on Sunday’s influential At Home magazine.

It described the property by saying: “The result is a vibrant home where east majestically meets west, all the while beautifully marrying the magnificent original features fo the building with the need for a contemporary lifestyle.”

The property in Liberton is now being marketed by Warners, Edinburgh’s number one solicitor estate agent and is on the market for a fixed price of £399,000 (0131 667 0232or wwww.warnersol.com)