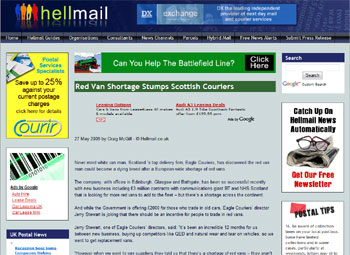 Scotland’s leading independent courier firm has been celebrating after being featured in one of the UK’s leading postal industry news websites.

Hell Mail ran an article about a European shortage of red vans was affecting Eagle Couriers – and highlighted how the firm was even considering changing its entire fleet to white vehicles instead of its famous red liveried vans.

Eagle Couriers director Jerry Stewart said that the firm had been waiting for more than a year to get new red vans. He added that, as the company was growing due to new contracts with major clients such as BT, he was considering turning the entire fleet white rather than waiting for the red vehicles to arrive.

The full article was published in Hell Mail and was the result of a media campaign by Holyrood PR PR in Scotland.