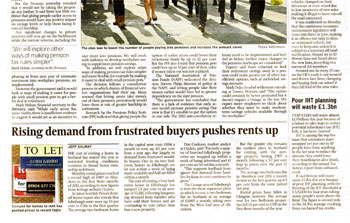 Scotland’s leading lettings portal Citylets has celebrated another piece of prominent coverage in one of the country’s national newspapers.

The Scotsman ran a feature in its Smart Money section about the latest Citylets data report, which revealed that rents were continuing to perform strongly across the country.

The report showed that rents in Edinburgh and Aberdeen were particularly strong, with the Granite City seeing higher two-bed rents than ever before. Citylets senior analyst Dan Cookson said that the trend reflected the ongoing problems facing the property sales market – where many would-be buyers were not able to afford a deposit for a property of their own and were choosing to rent instead.

The full article can be viewed on the Scotsman website, and was the result of a sustained PR in Scotland campaign carried out by public relations and social media experts the Holyrood PR.