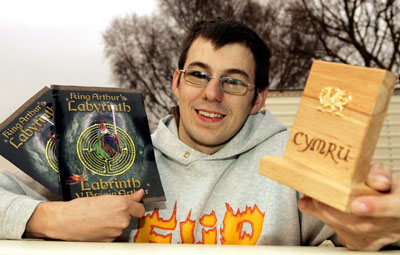 A proud Scot from Midlothian has become the owner of a one-of-a-kind £2000 heirloom after being picked above thousands of entrants in an unusual holiday competition.

Jamie Clarke, from Bonnyrigg, has been announced as the lucky winner of the King Arthur’s Labyrinth summer competition, earning him the unique gift – a hand-crafted Welsh dragon made of solid gold.

The competition was run by Welsh tourist and storytelling attraction King Arthur’s Labyrinth and was held over the 2009 summer months. Thousands of visitors to the underground storytelling experience were invited to fill out entry forms during their visits in order to win the unique piece of jewellery made from solid 18ct gold.

After receiving his prize, Jamie, 25, said: “I’m absolutely delighted to have won the Welsh dragon. Everyone in my family entered the competition when we visited King Arthur’s Labyrinth in the summer but none of us ever thought that we would be picked as the winner, so it’s a really wonderful surprise. There must have been thousands of other people who entered, so it’s not really sunk in that I’ve been lucky enough to beat them all.

“We were in such a hurry when we filled out our competition forms that we actually forgot to put down our phone number or e-mail addresses. The King Arthur’s Labyrinth team eventually had to contact me by post to tell us that I had won the competition – and we were a bit worried that the letter was a spam circular rather than bona fide winning note!

“Thankfully we soon found out that it was real and when they confirmed I’d be receiving the solid gold dragon, I was thrilled. I know that gold prices are currently rising and this means that it’s likely to become even more valuable in the future, so it really is a fantastic prize.

“It’s the most valuable thing I’ve ever won and I will be proud to keep it as a treasured memento of a great holiday. Visiting King Arthur’s Labyrinth was the highlight of our whole vacation in Wales, so it will be nice to have something special and unique to remember it by.”

PR in Scotland for storytelling attraction

The unique, hand-crafted gold prize was created by Phil Bryce Grainger, from the Agau Jewellery Studio in Wales, which neighbours the King Arthur’s Labyrinth attraction.

The jeweller spent two months designing and making the unusual piece, which he says has since doubled in value due to the rising price of gold.

He said: “When King Arthur’s Labyrinth asked us to create a piece of jewellery for their competition, we were only too happy to help. As the dragon is one of the most famous Welsh symbols, we thought it was only fitting to use the design on the Welsh flag as a template to create something very special and unique.

“We actually specialise in designing and creating Celtic jewellery, so this was quite a departure for us – as it is a figurine that is meant to be mounted rather than worn. We spent around eight weeks designing and moulding the dragon until we got the perfect result, and I’m sure Jamie will be thrilled with his prize.

“It’s a one of a kind piece of jewellery that would fetch anywhere up to £2000 these days if we sold it in our shop, so it’s a wonderful item to win.”

Shirley Owen, marketing manager at King Arthur’s Labyrinth added: “Our Welsh dragon competition really captured the public’s imagination over the summer and we had thousands of entrants eager to win the prize.

“We’re delighted that Jamie has emerged victorious and I’m sure he will treasure the dragon as a memento of his visit to King Arthur’s Labyrinth.”

Care residents get moving thanks to boutique physio partnership