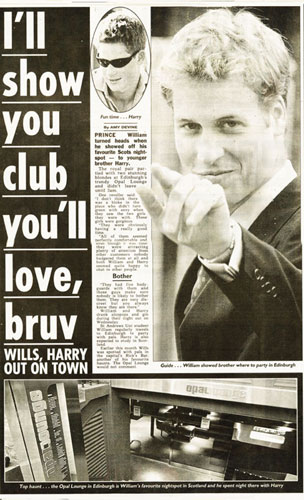 It’s estimated two billion people – around a third of the entire global population – will watch some part of today’s Royal splicing at Westminster Abbey.

That alone reminds us of the sheer, planet-spanning power and recognistion of Brand Windsor.

In this week’s Quiet News Day podcast (find it on iTunes every week) I discussed with co-host Peter Laing, the scale of the media frenzy around the Royal nuptials.

More than 7500 journalists from around the world were accredited, while a single news operation – Associated Press – needed 90 staff,  30 cameras and 7km of cable to cover it.

Yep, there’s nothing quite like a Royal spectacle to get the media juices flowing – and Royal spectacles are verging on commonplace here in Edinburgh.

Our agency takes its names from our humble beginnings, when we were based in small offices a short walk from the fledgling Holyrood Parliament and its grand old neighbour, The Palace of Holyroodhouse.

The palace is, of course, The Queen’s official residence in Scotland, sitting at the opposite end of the Royal Mile from Edinburgh Castle. All of which means the Scottish capital regularly plays host to a procession of Royal visitors, keeping our photographer friends over at Deadline News busy.

On the other side of the media coin, the value of Royal patronage predates modern PR by centuries. To be anointed by the monarch, or the Royal family, has always been seen as the bestowing a very profitable privilege.

Modern brands fully understand the value of the Royal Warrant which allows products or services to carry an official stamp reading: “By appointment to Her Majesty The Queen”.

In the words of the official Royal Warrant website: “Royal Warrants are a mark of recognition to individuals or companies who have supplied goods or services for at least five years to HM The Queen … warrants have always been regarded as demonstrating excellence and quality, and are highly prized.”

Among the 850 Royal Warrant holders are Carlsberg, Twinings, Heinz, Burberry and Land Rover.

They are among a very privileged few, who have earned formal Royal endorsments, enshrined in the machinery of monarchy.

However, even an unofficial Royal endorsement is incredibly powerful.

In 2002 – the same year Holyrood PR sprung into existence, just down the road from the Queen’s Edinburgh palace – we started working for Montpeliers (Edinburgh) Ltd, the group behind Edinburgh’s best style bars.

At the time, the future King was a student at St Andrews. The Fife town is famed for its golf course and its university; less so for its vibrant nightlife and choice of venues where young people can drink, dance and generally let off steam.

Inevitably, when it came to socialising, Prince William drifted toward Edinburgh and its large community of well-heeled and wealthy students, who were already part of the Royal circle.

And his favoured haunt? Yep … it was the Opal Lounge, owned and run by our client.

This story at the top of this post – which appeared in the Scottish Sun – appeared round about the time the younger prince, Harry, reached drinking age. As the country’s best-selling tabloid gleefully reported: “Prince William turned heads when he showed off his favourite night spot – to younger brother Harry.”

The headline (“I’ll show you club you’ll love, bruv”) and the story couldn’t have been more positive. It also delivered a knock on positivity that was nigh on impossible to quantify.

As well as more business, it brought the kind of profile most venues can only dream of – regular mentions in publications across the world as “Prince William’s favourite bar”.

Spend a night out in Edinburgh, in that word of mouth endorsement is still brought up regularly when the Opal Lounge is mentioned.

So, as William ties the knot today, I’ll be wishing him all the best – and when I’m next in a Montpeliers venue, I’ll drink a wee toast to him, for delivering one of our earliests PR successes, which remains one of my favourites.