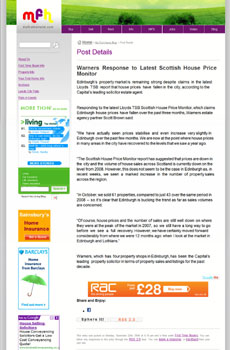 My First Home published a story about how Warners had responded to the latest Lloyds TSB report on house prices, which showed that property values were falling in the Capital.

Warners said that the stats – revealed in the latest House Price Monitor – did not accurately reflect the real picture in Edinburgh, as prices were continuing to perform well in the city. Estate agency Scott Brown said that the Edinburgh market had seen house price rises in recent months, and that the overall UK picture for property was encouraging.

The full story appeared in My First Home and was the result of a sustained media campaign by Holyrood PR PR in Scotland.