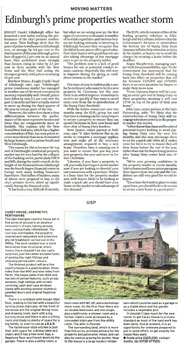 The Edinburgh and Lothians Property Group has welcomed another boost to its PR in Scotland after being featured in the pages of The Scotsman’s property supplement.

The group – which consists of five of the Lothians’ leading property solicitors – was featured prominently in the newspaper as part of an article encouraging househunters to buy a property before Christmas to avoid Stamp Duty.

The ELPG advised buyers that, as the Stamp Duty freeze on properties priced between £125,000 and £175,000 is coming to an end on January 1st 2010, buyers have a limited amount of time to ensure they do not have to pay the extra tax. John Lints, senior partner at the Lints Partnership said that housebuyers need to put an offer in on a property in the next two weeks to ensure they do not miss the deadline.

The article appeared in the Scotsman’s property section and was the result of a continued media strategy carried out by Edinburgh public relations agency Holyrood PR.