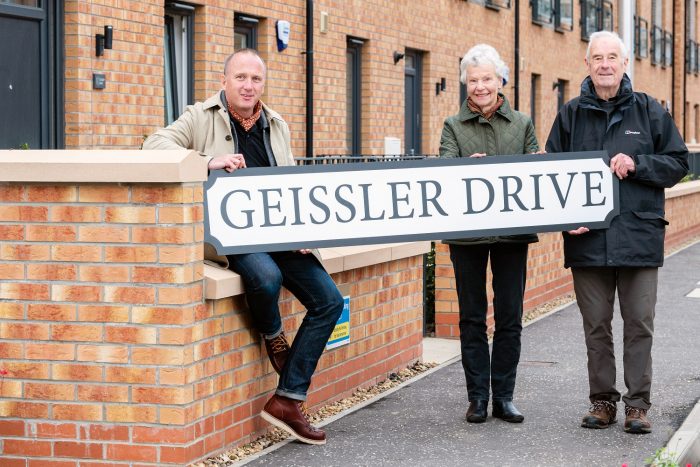 A STREET at a recently launched development near the Shore has been named in honour of celebrated Leith glass engraver, Alison Geissler.

Geissler Drive, at Waterfront Plaza by CALA Homes (East), is a celebration of the life and work of Alison, who was one of the foremost Scottish glass engravers and the grandmother to broadcaster Martin Geissler.

Alison, who grew up in the area, was awarded an MBE for her services to glass engraving in 1991, and the Chairman’s Medal of the Edinburgh College of Art, at the age of 101.

One of her most notable pieces of work, a set of engraved goblets representing ten of the Queen’s Beasts, was presented to the Queen for her coronation in 1953.

Alison married watercolourist painter William Geissler in 1931, and is survived by three children, Paul, Erik and Catherine, and 4 grandchildren.

Dr Paul Geissler visited Geissler Drive after its naming. He said: “My mother would have loved the idea of a street being named after her, although she might have found it a little odd! She had a great sense of fun, and a keen interest in Leith and its people. She was fascinated by the way places change, so it seems appropriate that, in a way, she’s become part of Leith’s evolution.”

Alison’s grandson, Martin Geissler, presenter with BBC Scotland and former ITV Africa Correspondent, said: “My gran lived until 103 and was a proud Leither all of her life. I have so many happy childhood memories of her and her house on Dudley Avenue.

“She passed away almost a decade ago and we all still miss her, but having a street named after her is an extraordinary honour, and in a way, it helps her live on.”

Alison studied at the Edinburgh College of Art from 1925-1930, and continued her glass engraving career until the age of 94 – pieces of her work can be found in the majority of British public collections and in the collection of the Queen. Almost all of her work was done by traditional copper wheel engraving.

Philip Hogg, Sales and Marketing Director with CALA Homes (East), said: “Leith is a location that has inspired for generations and people like Alison are fundamental to its character and story.

“We’re thrilled to have her name adorn one of the most prominent streets at our new development here on the waterfront.”

Diane Broughton, Street Naming Officer at Edinburgh City Council, said: “New streets are generally named after people, places or events associated with Edinburgh to preserve history and our sense of place. Recently we have tried to prioritise using names of women where possible – Geissler Drive is one of many streets named after famous Scottish women and suffragettes.

“When Geissler Drive was suggested to us we thought it was a great idea, and we’re delighted that the Geissler family was happy for us to go ahead with the naming.”

Set in the heart of the thriving Leith shoreline, crowned the Best Place to Live in Scotland by The Sunday Times, Waterfront Plaza benefits from a range of vibrant bars, cafes and restaurants, as well as all the amenities of Ocean Terminal which is situated directly opposite.

The development follows on from nearby successful projects by CALA at Albert Dock, Trinity Park and Ten Brunswick Road.

Accessing the capital city centre is made easy with regular bus services and cycle paths, including the nearby National Cycle Network which offers direct links to Granton and the city via the Water of Leith. With the extension of Edinburgh’s tram network to Leith and Newhaven, Waterfront Plaza could hardly be better connected.

Waterfront Plaza was awarded one of the Scottish Home Awards’ (29 Oct) most highly contested categories, “Innovation in Design” for its modern take on historic Edinburgh colonies.

Waterfront Plaza has a collection of spacious four-bedroom townhouses and one, two, and three-bedroom apartments available.  For more information, please visit, https://www.cala.co.uk/homes-for-sale/east-of-scotland/waterfront-plaza or call 0131 516 6832.

Are you on the hunt for the right Property PR to help your business?

Getting in touch with our team of property PR experts couldn’t be easier. Simply give us a call on 0131 561 2244 or take a few minutes to fill in the form below and one of our team will get straight back to you: