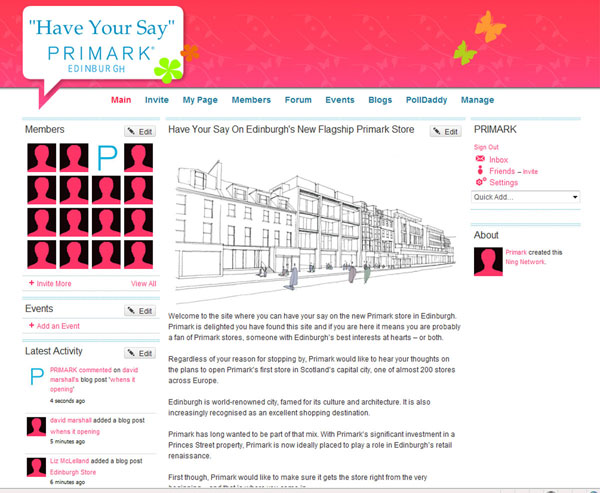 Fashion retailer Primark has launched a dedicated website for shoppers and other groups to publish their views about its planned new flagship store on Princes Street.

The move is an important first for Edinburgh and will allow anyone to have their say about the proposed development and so influence how the final building looks.

Those who take part at www.primarkedinburgh.co.uk will be able to post their own thoughts, start discussions and will be encouraged to comment on the views made by others.

A Primark spokesman said: “Edinburgh is world-famous for its culture and architecture and is growing in importance as a shopping destination and we have long wanted a presence in the city.

“Since our plans are for a flagship store in an iconic location, it is important we hear all views and that the process is done thoughtfully and sympathetically.

“With this website we are using new social media tools to give a voice to anyone who has basic access to the internet. We don’t think anything like this has been done for a major retail planning application in Edinburgh before.

“Our hope is to hear from local community groups, heritage watchdogs, business leaders and anyone with the city centre’s interests at heart.  That way we can deliver a store which is good for shoppers, good for Princes Street and good for the future of the city.”

Primark unveiled its outline plans during two public meetings held on Princes Street on January 19 and 20 – however the new website will ensure the debate and consultation runs as widely as possible until March.

The proposed Primark store would be a 70,000 sq ft store employing 570 people and would attract valuable footfall to the city centre. It would also help fulfil the city’s “string of pearls” ambition to have a major retailer on every block of Princes Street

The new website allows anyone to register securely using a valid email address and they can then join the online community under a user name of their choice. Discussion topics will be set by those taking part, though some moderation will take place to prevent offensive language or behaviour.