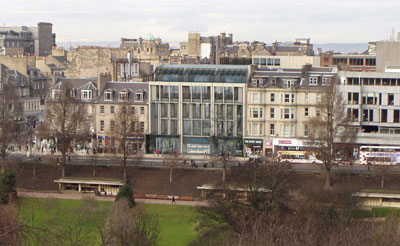 Fashion retailer Primark was today (Aug 25) given approval for its long-awaited flagship new store on Scotland’s most famous shopping street.

Planners in Edinburgh have approved the blueprint for a 75,000 sq ft store on Princes Street, which will create hundreds of construction and retail jobs in the capital.

The fashion retailer now plans to start work as soon as possible, with the opening scheduled for Winter 2011.

A spokesman for Primark said: “We are delighted our plans for a flagship store on Princes Street have been approved.

“Months of planning and public consultation have gone into creating the final design brief for this building and we are looking forward to turning these plans into a reality.

“There is great demand for a Primark store in Edinburgh and we expect this decision to approve our flagship store in the heart of the Capital will be welcomed by shoppers and retailers alike.”

Cllr Tom Buchanan, Edinburgh’s Convener for Economic Development, said: “We are continuing to work closely with Primark to help them realise their ambitions to open a flagship store here in the centre of Scotland’s Capital.

“Not only will this development provide a welcome boost to our retail offering but it will also create a great many jobs during these difficult times.

“Like us, Primark recognise the tremendous potential of Princes Street as a shopping destination and, with their planning application being approved today, I look forward to the development progressing to the next stage.”

The flagship Edinburgh store in the former Marks & Spencer building will provide Primark with its 18th store in Scotland, and will create hundreds of construction and retail jobs in the city.

To meet new planning legislation, Primark carried out an exhaustive three month public consultation exercise to shape the plans for such a high-profile and sensitive site.

Almost 7,000 people joined a special website set up to encourage public consultation about the project.

The spokesman added: “We would like to thank all of the people who responded during the public consultation and made their views about the building known on our website and elsewhere.

“Edinburgh is a fantastic city and we have worked closely with planners and heritage groups to ensure our plans will create a building fit for such a special location.”

The designs for the building have been shaped by the council’s “string of pearls” Framework for Princes Street, and will see a new pedestrian link opened up between Princes Street and Rose Street, as well as new views onto Edinburgh Castle opened up to shoppers for the first time.

Renowned city architect 3DReid came up with the final designs, which meet the criteria set out in Edinburgh’s comprehensive Development Framework.

The string of pearls concept divides the historic street into blocks each with a distinctive mix of retail, leisure and cultural activities that will help to reinforce the unique character and identity of each and help to revive the fortunes of Princes Street as a prime shopping destination.

3DReid were also instrumental in gathering views and feedback from heritage bodies, local businesses and members of the public during the extensive consultation exercise.

A spokesman for 3DReid, said: “With new shop fronts to both Princes Street and Rose Street, the development will promote footfall between the two.

“The 75,000sqft building has been designed to respect the scale and character of a valuable World Heritage Site and the Edinburgh New Town Conservation Area, as well as provide the city with a much-needed catalyst for the retail-led regeneration of Princes Street.

“We have looked holistically at the development to create a more coherent structure to this block on Princes Street, which restores the historic footprint of the site.

“For the first time, the public will now have access to the upper levels of the building, which will command spectacular and iconic views across Waverley Valley to Edinburgh Castle.”

Primark  currently has 201 stores in the UK,  Ireland, Spain, the Netherlands, Portugal, Germany and Belgium.