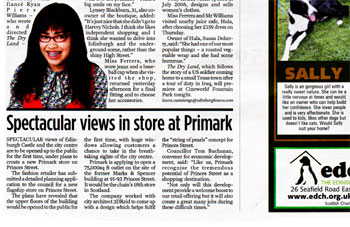 Clothing giant Primark has received another high profile piece of local newspaper coverage highlighting the plans for its new flagship store in Edinburgh.

The high street company was featured in the Edinburgh Evening News, which reported on how its proposed new outlet on Princes Street would open up new views across Edinburgh Castle and the Forth Valley.

Under the plans, the top floors of the Princes Street building would be opened up to the public for the first time as part of a 75,000 sq ft flagship outlet. The proposals have already been scrutinised as part of a huge public consultation, and are now expected to be heard by the city’s planning committee later this summer.

The full article can be viewed on the Evening News website and was the result of an Edinburgh PR campaign maintained by Holyrood PR public relations in Scotland.