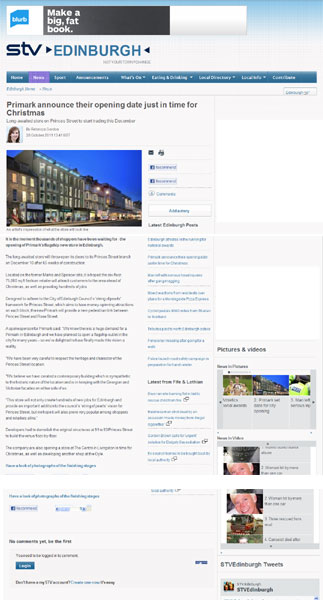 Thousands of avid shoppers will be elated today as Primark has finally revealed the opening day of the anticipated Edinburgh store.

The store renowned for reinvigorating the world of affordable fashion will open its doors on the 10th of December after 65 weeks of construction.

It was granted planning permission last August and since then the building has been subjected to one of the biggest construction projects seen in the city for a generation.  A tremendous amount of hard work has gone into the creation of the building which has new views onto Edinburgh Castle and a new pedestrian link between Princes Street and Rose Street.

Located on the former Marks and Spencers site, it is hoped the six-floor 75,000 sq ft fashion retailer will attract customers to the area ahead of Christmas, as well as providing hundreds of jobs.

A spokesperson for Primark said: “We know there is a huge demand for a Primark in Edinburgh and we have planned to open a flagship outlet in the city for many years – so we’re delighted to have finally

made this vision a reality.”

Primark are also opening a store at The Centre in Livingston in time for Christmas, as well as developing another shop at the Gyle.

The full article appeared online on STV Edinburgh and was secured as part of a sustained PR and media relations campaign carried out on behalf of Primark by Holyrood PR.