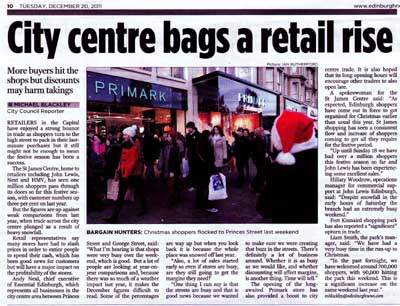 Excellent PR in Scotland for Primark in the Edinburgh Evening News

As predictions of the plummeting High Street sales loomed it has been revealed that retailers in the capital have acutally enjoyed a strong bounce back effect.

The St James centre which houses retailers such as Next, HMV and John Lewis has seen almost one million shoppers through its doors so far this festive season. Customer numbers are 3% up on last year’s Christmas shopping period.

And budget fashion chain Primark, which opened in Edinburgh earlier this month has been credited with help fuel the rise in city centre trade, according to an article in the Evening News, the city’s biggest selling newspaper.

Andy Neal, chief executive of Essential Edinburgh which represents all businesses in the city centre is between Princes Street and George Street said “One thing I can say is that the streets are busy and that is good news we wanted to make sure we were creating buzz in the streets.

He added “There’s definitely a lot of business around.”

This coverage was secured with Edinburgh Evening News as a part of a sustained public relations campaign carried out by Holyrood PR on behalf of Primark.