Priceless Links Of The Day 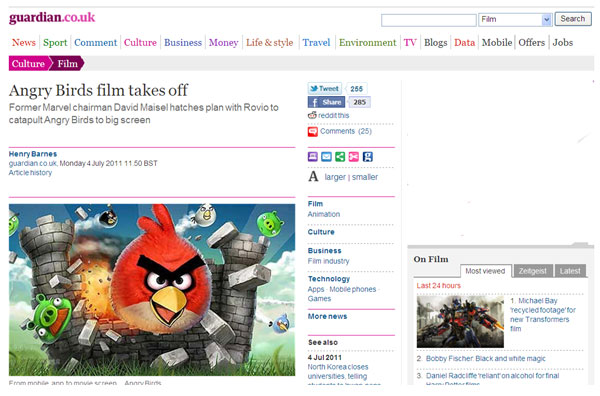 Why not send us your comments or link suggestions and give us a great way to start Tuesday off? You can leave comments on our Facebook and Twitter pages.

There’s been a spate of cinematic offerings in recent years based on games or theme park rides. We’ve already had Pirates of the Caribbean and the Social Network and there are movie adaptations of Battleships, Monopoly and Cluedo currently in the works – but the latest movie to be green-lit if even more ridiculous. Yes, the multi million-selling mobile phone flash game Angry Birds is now set for a cinematic makeover, in a move that must make original screenwriters grind their teeth in despair. One assumes that it will be a CGI cartoon job filmed in “glorious” 3-D and aimed at the kiddies, but that’s not the point. It’s a simple time-wasting game designed to make commuting more bearable – not Citizen bloody Kane. Quite how a game that requires flinging feathered animals at a castle guarded by paraplegic, green oinking pigs will actually work is anyone’s guess. I can’t imagine it will be troubling the Academy Award committee, though.

It has been reported that Tom Cruise and Katie Holmes have invested in a “snoratoria”, a sound proofed room designed to combat the affects snoring has on their relationship.  The “snoratoria” is place where Tom seeks refuge to snore his head off, resting safe in the knowledge that no matter how loud het gets, he won’t disturb his wife’s slumber.  Jealousy is an understatement when looking for an apt adjective to describe how I envy their idyllic living situation.  The rest of us simply have to either simply put up with it, sleep top to toe, or sneak into the spare room for some much needed rest-bite when our significant other decides to subconsciously challenge themselves with a snore off, reaching crescendo just as you reach breaking point and thrust a pillow onto their face in the hope that they stop breathing for long enough for you to fall asleep and short enough for them to continue living the following day.  Oh how the other half live…..snorer, you know who you are grrrrrrrr!

He may be a multi-millionaire novelist famous for creating page-turners full of mystery and conspiracy theories, but Dan Brown has also been revealed as the writer whose books we just can’t wait to get rid of. The author has topped a list of the most-donated books to Oxfam stores across the UK, proving that although we’re happy to read pulp such as the Da Vinci Code, we don’t want it cluttering our bookshelves when we’re finished. It’s the third year running that Brown has had the dubious honour of topping the Oxfam list – which this year saw him beating Iain Rankin and Jeremy Clarkson to the prize. But there was also some good news for the US writer, as he was placed third in a separate list of Oxfam’s best-selling authors.

A survey carried out in Canada reveals that more than half of its citizens would be happy never to see a dollar bill again. This blog explores that notion – a world with no coins jingling around in your pocket, or wads of £20 notes around on a night out. Everything would be bought with the swipe of a card or a flash of a mobile phone – can you imagine it? The upside and downside of the future is considered – who would lose out and who would gain? Interesting thoughts.

ANOTHER YEAR, ANOTHER FAILURE (Raymond)

Did we really expect anything other than a gutsy but ultimately disappointing performance by Andy Murray as he attempted to finally put a Brit on the Men’s Champions board at Wimbledon? While we may have to wait another year for Andy to break this hoodoo (although Novak’s performance suggests he may take some doing to  wrestle the crown off him for the next few years), here’s a chance to reveal in the 50 things we learned from this year’s event. My favourite is the observation that the BBC messed up by thinking winning majors is contagious – judging by the efforts to get Rory McIlroy close to Andy Murrary.