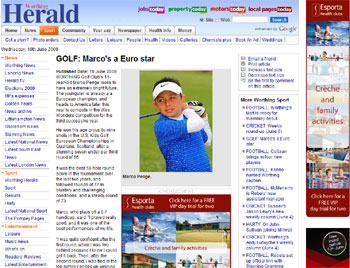 The U.S. Kids Golf European Championship has won another high profile piece of newspaper coverage in one of Worthing’s biggest newspapers.

The Worthing Herald ran a report on the event and highlighted local youngster Marco Penge’s performance in the competition, where he beat his nearest competitor by nine shots to win the Boys 11s section.

Marco was one of 430 young golfers from 34 countries who attended the event, which was staged across five of the most historic golf courses in East Lothian last month. By triumphing in the tournament, the youngster has also qualified for the prestigious U.S. Kids Golf World Championship in Pinehurst, North Carolina, later this year.

The full coverage appeared in the Worthing Herald and was the result of a sustained campaign by Holyrood PR PR in Edinburgh.