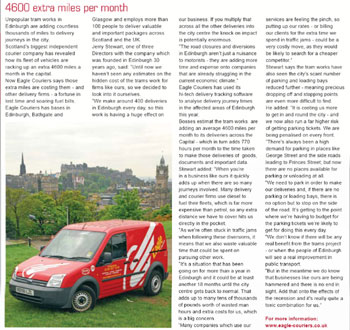 Scotland’s leading independent courier company has been celebrating after scooping a prestigious piece of coverage in one of the country’s most well known transport magazines.

Eagle Couriers has been featured in the latest issue of Fleet, Agricultural and Commercial Transport (FACTS) magazine, which reported on how the Edinburgh tramworks were causing chaos at the firm.

The company claims its fleet of vans are racking up an extra 4,600 miles a month due to the city centre’s major tram works, which are causing road closures and diversions.

Jerry Stewart, one of Eagle Couriers’ three directors, said to Road Transport: “We make around 400 deliveries in Edinburgh every day, so this work is having a huge effect on our business. If you multiply that across all the other deliveries into the city centre, the knock-on impact is potentially enormous.”

The full coverage appeared in FACTS magazine and was the result of a PR campaign by Holyrood PR PR in Scotland.