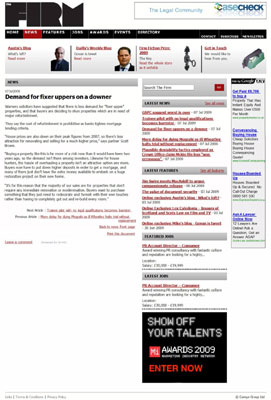 Edinburgh’s leading property solicitor Warners has been celebrating after receiving another major piece of press coverage in a leading legal journal.

The Firm, which is read by thousand sof legal professionals across Scotland, reported on how Warners believes that the economic downturn has led to a slowdown of “fixer-upper” flats being bought by househunters.

The company says that due to tighter lending restrictions on buy-to-ley mortgages, fewer investors are willing to take the risk of fixing up a dilapidated property in Edinburgh. Estate agency partner Scott Brown added that even regular house hunters were put off from fixer-uppers due to the extra expense of renovating them – meaning that the Grand Designs boom appears to be over.

The full coverage appeared in The Firm and came following a proactive media push by Holyrood PR PR in Edinburgh.