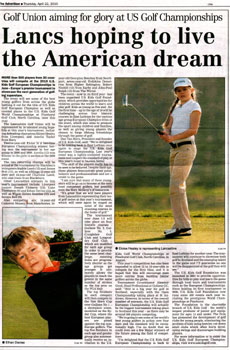 A major golf tournament showcasing the best young talent in the game has been given another PR Scotland boost thanks to the Holyrood PR.

The U.S. Kids Golf European Championship was featured in the pages of the Ormskirk Advertiser, which reported on how junior golfers from Lancashire would compete at the tournament.

Among the Lancashire hoefuls is two-time European Championship Eloise Healey, who is looking to complete her hat trick of victories in 2010. She will join ahundreds of young players from across the globe at the competition, which is being staged between June 1-3 in East Lothian.

The latest newspaper coverage was the result of a sustained social media and PR in Scotland campaign devised by Edinburgh public relations experts the Holyrood PR.