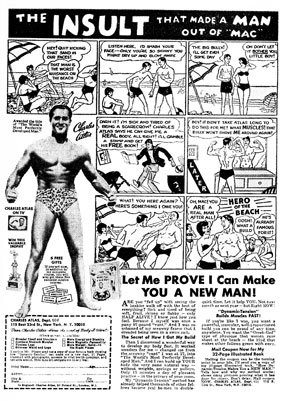 At least the Scottish Government seems to believe so, in which case it must be true. Because what is clear is that the Holyrood Parliament mob like it B-I-G.

Yep. When it comes to the Scottish Government’s preferred PR suppliers, they like the appearance of an impressively sized package. Something really meaty.

It is timely that the public relations industry bible, PRWeek, is currently gathering information for its Top 150 PR Consultancies 2009, the definitive guide to the biggest PR firms and their revenues. It will be published in April.
I say timely because it prompted me to look over the 2008 listings and see if the six agencies on the Scottish Government’s PR roster feature – and if so, where?

While the main reason for this is sheer unadulterated nosiness, let’s not forget these six companies are pretty much guaranteed to be handed ALL of the government’s (publicly funded) PR work over the next couple of years.

I want to be absolutely clear here: I have NO criticism to make of any of the six roster agencies. They are blameless in having applied and made it onto the list fairly, as part of a transparent and accountable process which also happened to be highly competitive.
However, now that they are there, they are part of a deeply flawed system, because the government now seems intent hat only the roster agencies should be able to pitch for public sector work.

I suspect that as disquiet grows about this, the roster agencies will be equally uncomfortable with this insidious situation. They are being thrust into an unenviable position not of their making.

I’ve yet to find a definitive count, I reckon there’s somewhere close to 80 listed PR companies in Scotland – and probably well over a hundred when you account for solo practitioners. However, the government is effectively telling the Scottish PR sector there are only six PR agencies that count.

While taking nothing away from the practitioners who bust their humps to get their companies onto the roster, it hasn’t escaped my attention that the successful agencies are either giants in their own right – or are part of some far bigger organisation.

So let’s just feast our eyes on the impressive dimensions of those on the big list (BTW – to keep things straight they are listed here by who came out highest on the government’s scoring system – more of which, later):

Consolidated
London-based Consolidated PR was the 54th biggest agency in the UK in 2008, when it was listed as having 59 staff.
Its place in the list was based on a 2007 turnover of £5.9m, with PR fee incomes accounting for close to £4.5m of that.
According to its own website it is “no slouch” north of the border, with offices in Glasgow and Edinburgh, headed up by Consolidated’s longest-serving employee, Will Holt.

Golley Slater
Listed as being based in London/Cardiff, GS is a privately owned, independent marketing solutions group. It employs more than 350 people, around 80 of whom are in PR.
In the 2008 PRWeek listings, GS was at number 42 – with a turnover of £6.2m and a PR fee income of just over £5m.
It has 11 office around the UK, including one in Edinburgh and, according to its website, GS has seven staff in Scotland – including five working in PR.
The GS main man in Scotland is Ian Dommett, who has made some important points to me on the subject.
He says: we are fewer than 15 people, we don’t have anyone free for form-filling, the whole process was undertaken by client-facing PR professionals, usually working evenings and weekends for weeks on end, and all after several years of not getting though PQQ and ITT processes.”
Credit where it’s due – and I refer to my earlier point, that the successful agencies are not the problem in this nasty little conundrum.

The Leith Agency
One of three firms on the list proudly flying the flag for Scotland. Leith is a Scottish institution – and as befits most of those on the list, it is something of a behemoth.
So big, in fact, it’s difficult to pin down exactly who is who. The Leith Agency itself is probably best known for its advertising work. Truth is I always thought it was an advertising agency. Now I’m not really sure.
It would seem it is now part of something called the Tangible Group along with digital agency, Blonde and Stripe Communications (and possibly a few others).
And because those wacky, creative advertising types like to keep us all on our toes the Tangible group is, well, pretty intangible. But I’m sure the website due to launch in nine days or so will clear up any confusion.
Stripe is the PR wing of the business and it is widely accepted that while The Leith Agency might be the official name of the business listed on the Scottish Government’s roster, it will actually be Stripe delivering the PR work
I’ve got no idea of the financial performance, staff numbers or any other aspect of the numbers involved at the Leith Agency or its subsidiaries, sister organisations or spin-offs.
But I’d guess the figures are pretty impressive. And BIG.
What I do know is that Stripe currently lists 12 staff on its website.

Weber Shandwick
Of the six on the list, none are bigger than Weber Shandwick.
No sirree. This is a true monster of the deep.
It’s got the kind of financial clout which comes from having a turnover that’s bigger than the GDP of some small countries (Scotland, anyone?).
The London-based firm is a top five UK performer, according to the PRWeek listings, so it’s right up there among the biggest of London’s big PR big guns.
The 2008 guide actually has WS ranked at number 4 – with a breathtaking £30.9m in annual PR fees and 326 staff.
Around 40 of those staff are in Scotland, where the firm clams to have a 25 year pedigree and offices in Edinburgh, Glasgow, Aberdeen and Inverness.

Barkers
Awright, this is the firm I know the least about – so mibbes someone out there in PR Land can fill in a few of the blanks?
Barkers PR was founded in Scotland and now boasts bases in Edinburgh, Glasgow and Aberdeen.
But it seems to be the easily overlooked wee sister of Barkers recruitment – which is UK wide and has a much fancier website.
While Barkers PR itself doesn’t feature in PRWeek’s Top 150 list, I suspect its parent group is a pretty impressive beast.

BIG Partnership
While the agency name is actually taken from the surname initials of the three founders (Barr, Isdale, Graham), there’s no denying this is more than just BIG by name.
A genuine top 50 UK player, BIG is also a truly Scottish based company.
Indeed, it is the only Scottish PR firm in PRWeek’s top 50 across- coming in at a highly respectable number 32.
To achieve that in 2008 it recorded PR fees of £6.4m and employed 90 PR staff.
So I’m sure they’ll be relieved to have made the government’s list – even if they did only made it into the sixth and final slot a full 10 points behind Consolidated.

There you go. Quad Erat Demonstrandum. To get on the list you’ve got be stacked; big in all the right departments – and not scared to flaunt it. You know what I can mean. The kind of garment filling impressiveness that ends up busting out all over the place.

Let’s be clear. I don’t begrudge anyone their size or scale. I’m as impressed as the next guy at the flexing and posturing that goes on at the PR equivalent of Muscle Beach.

However, by signalling that only the Big Six will be able to pitch for public sector work, the Scottish government has turned those muscle-bound agencies into unsuspecting seaside stooges, while kicking sand in the face of those perceived to be eight stone weaklings. 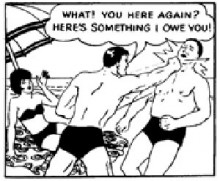 So a word of warning to wee Eck and his pals ensconced in their funny-shaped hoose at Holyrood. Those eight-stone weaklings have a habit of coming back to haunt you. One a**e-kicking begets another, and all that.

The other 70 or 80 agencies in Scotland might be relatively puny, but let’s not forget the cautionary tale of Charles Atlas, the stick-limbed weakling of his day who didn’t take it at all well to having sand kicked in his face.

Don’t be surprised if, when you least expect it, there’s a tap on your shoulder and a thunderous-faced Charles Atlas of the agency world is there to hand you a tanking that will even up the score.