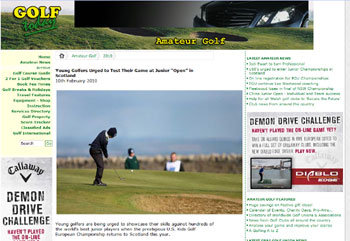 The U.S. Kids Golf Foundation has celebrated new coverage in the online golf press for its forthcoming 2010 European Championship.

Amateur Golf Today, which collates news and views about amateur golf in the UK, reported on how the prestigious competition was returning to East Lothian in June.

The European Championship will see more than 500 youngsters from around the world battling it out on four historic golf courses in East Lothian. The winners of each age category – which will feature kids between from 6-18 years old – will receive the coveted European Championship prize, as well as entry into the World Championships at Pinehurst later in the year.

The full article can be read on Amateur Golf Today and was the result of a sustained Scottish PR and social media campaign by the Holyrood PR.