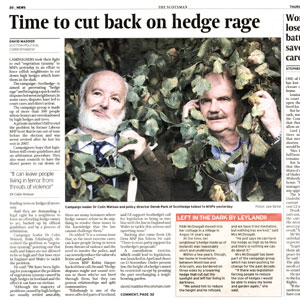 Scothedge campaigners received a media boost when they took their campaign to end “vegetation tyranny” to the Scottish Parliament.

The Scotsman newspaper reported on the campaign’s aim to change Scots law to allow people to resolve high hedge disputes.

The article told how protesters met MSPs to educate them on problems their constituents faced when neighbours failed to trim back their foliage.

The story by political reporter David Maddox told how there is nothing under Scots law which allows people to challenge the height of plants even though planning permission must be sought for any built structure over seven metres high.

The article, which ran under the heading of “Road rage … Air rage … Now hedge rage …” told the story of Pam McDougall, whose Angus cottage was overshadowed by her neighbour’s leylandii hedge.