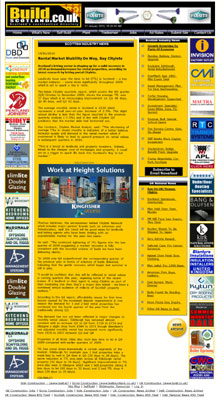 Build Scotland, which reports on the Scottish housing and construction sectors, reported on the latest Citylets quarterly data report – which showed rents were continuing to stabilise across the country.

The report, which covers rents in Edinburgh, Glasgow and Aberdeen, showed that the average time to let in the cities was reducing, which is a sign that the rental market is starting to recover and stabilise. Rent levels in the three locations are also remaining steady after more than a year of turbulence caused by the global downturn.

The full story can be seen on Build Scotland and was the result of a pro-active media campaign organised by Holyrood PR PR in Scotland.