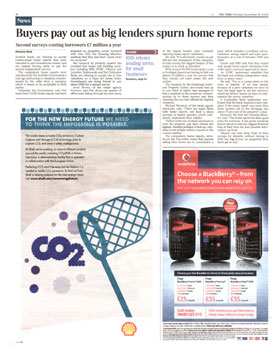 The Capital’s leading property solicitor has been celebrating after securing new headlines in a major national newspaper.

Warners solicitors and estate agents was featured in The Times newspaper, which reported on how Home Reports were affecting the property market in Edinburgh and across the rest of Scotland.

The newspaper revealed that many banks and lenders in Scotland were not accepting valuations published in Home Reports when reviewing whether to approve mortgages. Warners estate agency partner Scott Brown told The Times that about one quarter of offers were falling through because many of the largest lenders were routinely rejecting home report valuations.

The full article can be seen on the Times website. Warners enjoys a high media profile and positive headlines thanks to a Scottish public relations strategy maintained by Holyrood PR PR in Edinburgh.